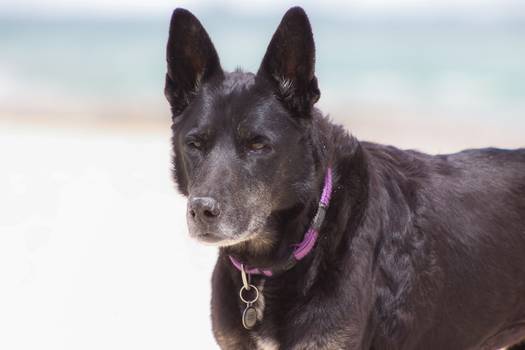 I was driving to work on the 13th of January 2005 and was late again. I had, however, recently resigned and only had two more weeks to work, so I wasn’t particularly worried. I was mulling over what I had to do that day whilst half listening to the radio and keeping an eye on the time; it was 8:20am, which meant that if all went right, I might just get to the office in time.

All of a sudden, the cars in front of me slowed down for a reason that I couldn’t see. I was wondering why people were slowing down, and then I saw her. I can’t tell you what I thought she was, as I really didn’t know, but she was some kind of animal. She was crossing Francie van Zijl Drive in Elsies River – a very busy four-lane road with an island in the middle. I was in the right-hand lane at the time, but something made me decide then and there that whatever this creature was, I needed to save her.

I managed to get into the left lane, and then onto the shoulder of the road. I then started reversing back down the road looking for this tiny black animal. I eventually spotted her climbing onto the pavement on the opposite side of the road. I didn’t have time to marvel at the fact that this tiny creature had just crossed four lanes of rush-hour traffic before I bolted across the road to fetch her.

She saw me coming, and I gave her credit for trying to run away from me, but it was no contest. I caught up with her walking at normal speed. It was then that I realised that I had a dog.

She was absolutely revolting. There’s no other word to describe her. She had an advanced stage of mange, and it looked as if her right hind leg was broken. She was skinny and, as a result of the mange, had no fur. She looked like a little monkey-cross-alien!

I took her to the office and found her a box from the copier paper that became her first home. She spent most of the day asleep in the box, probably exhausted from whatever she’d been doing in her life up until then. My colleagues doted on her and fed her all number of things, from porridge to sandwiches. By the time it was home time, we’d named her “Allsorts”, although this was later to change.

I’d made an appointment with my vet, and I drove this little darling there after work. I wanted him to look at her and tell me if there was any hope. (At that stage, I didn’t even know if she was a girl – partly because I didn’t want to pick her up to check, but also because she was so skinny, it was hard to tell.)

My vet gave her one look and told me that she had sarcoptic mange, which is the highly contagious form. I also asked about her leg, and he confirmed that she had a fractured femur – probably broken for around a week and it was starting to heal, very badly. He also estimated her age to be around 8 – 10 weeks old. I asked him if, with all of the above, she was worth saving, and I’ll never forget his words: “Any animal is worth saving.”

We decided on a plan of action. He’d keep her for approximately a week to treat the mange (as I had two other dogs at home already), and his colleague would insert a pin into her femur the next day. Also, once the pin was in, she’d have to be kept quiet, so keeping her in his hospital would also be ideal.

I left her there, crying tears of joy that she was going to be okay.

I got home and then the realisation of the situation hit me – I didn’t want another dog, I had two already. What was I going to do with another dog? No one else would want her – she was just a common street mutt, and having driven that route to work for almost two years, I’d seen the number of seemingly homeless dogs walking around. I could’ve picked up 10 dogs a day if I wanted to. I then remembered what I’d said when I started driving that route and saw all those dogs: I couldn’t save them all, but if I ever saw one that had been knocked over but was still alive, or I saw a puppy, I would save them, as they needed a second chance. And here was the puppy that had eluded me for 18 months, and two weeks before I was due to leave, she’d crossed my path. I took that as a sign.

The vet phoned me the next day to tell me that she weighed 1.8kgs – he thought I’d want to know that. He needed to weigh her for the anaesthetic, and he’d call me again after the operation.

That afternoon, he called to tell me that the operation had been a success, and all was fine. Then he told me that she’d died! I was horrified. He’d just said that she was fine. He went on to explain that the operation was a success, and they were washing their hands and congratulating themselves on a job well done when she stopped breathing. After resuscitating her, they got her breathing again, and just when they thought it was fine, she stopped again. Another successful attempt, and then she stopped breathing for the third time, and this time her heart stopped beating as well. It had taken them a total of 15 minutes to get her going again, but after the third attempt, she kept breathing and her heart continued to beat. Guess she figured that they weren’t going to let her go.

She spent a total of 11 days in hospital. When I went to fetch her, I took my other two dogs along too, just to check that they wanted a new sister. All went fine and I took her home.

Since that day, life’s been a blast. Watching this hairless horror grow into the beautiful dog that she is now was a pleasure to see. She now weighs 22kgs and is a large dog!

Pumba has excelled in Agility and Jumping, having reached Grade 3 in SADAA and having represented Boland in the Interprovincial team on two occasions. She’s received provincial &frac12; colours for agility.

She was also chosen to represent the Boland B Flyball Team (Boland Falcons) in February 2007 and has attained full provincial colours for Flyball. Boland Falcons also won the KUSA Flyball Nationals in 2008, and Pumba proudly sports this title. In addition, she’s achieved the title of KUSA Flyball Grand Champion, the 7th dog in South Africa to achieve this, and she’s also a SAFDA Flyball Grand Champion.

Pumba underwent two cruciate repair operations in 2010, and despite these and the months of rehab that followed, she came back fighting, going on to complete the KUSA Canine Good Citizen test, which she passed with flying colours. This means that we can now add the letters CGC behind her name as well, and she should be readily accepted anywhere as being a “decent dog”. She’s subsequently gone on to pass the Silver and Gold level of this test.

Pumba is an absolute pleasure to behold, incredibly loving, though also very protective. She was named “Pumba” after the warthog in the Lion King, as she looked just like a warthog when she had no fur as a puppy, but that name certainly doesn’t suit her now.

I’ve not once regretted the day when I decided to rescue a street mutt. She’s made my life richer. 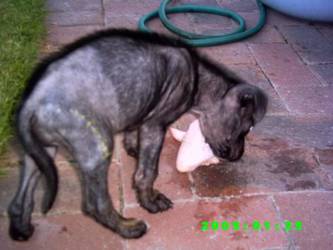 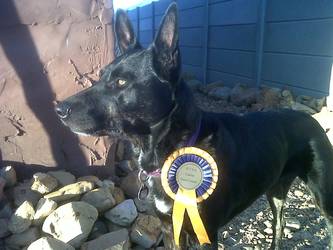 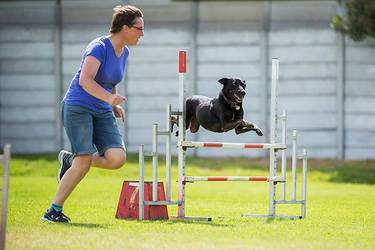 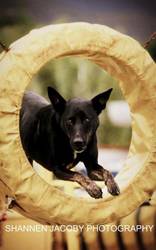 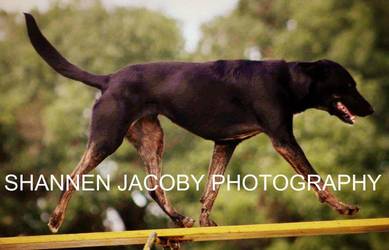 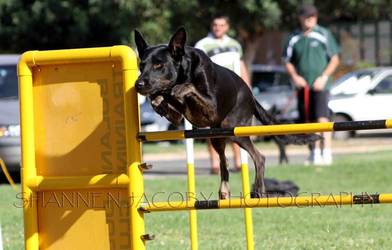 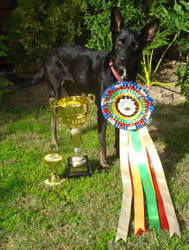 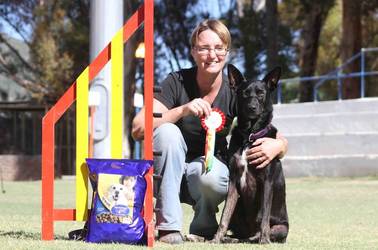 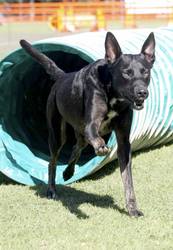 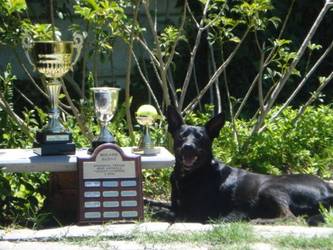 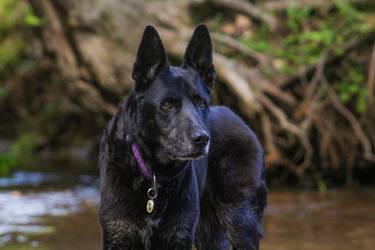 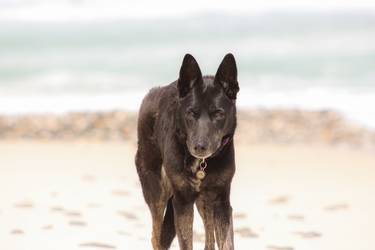 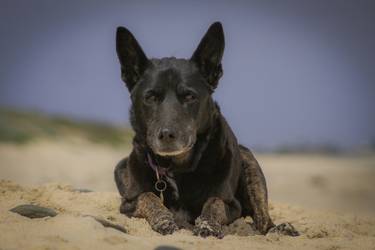 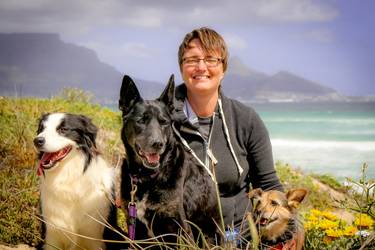 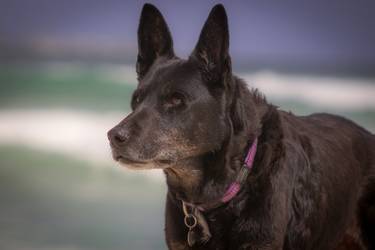 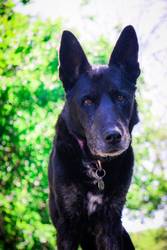 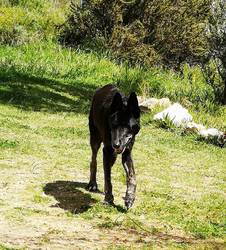 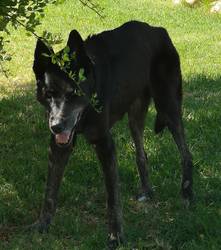 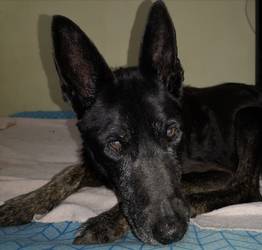 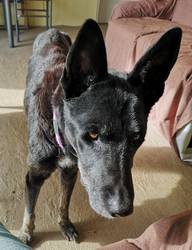 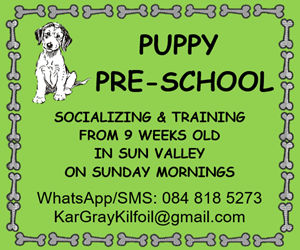 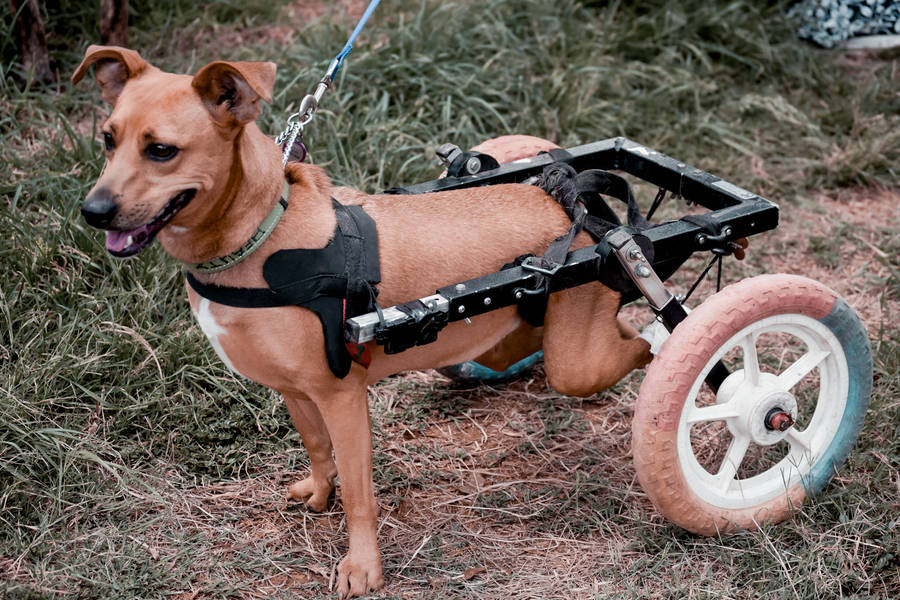 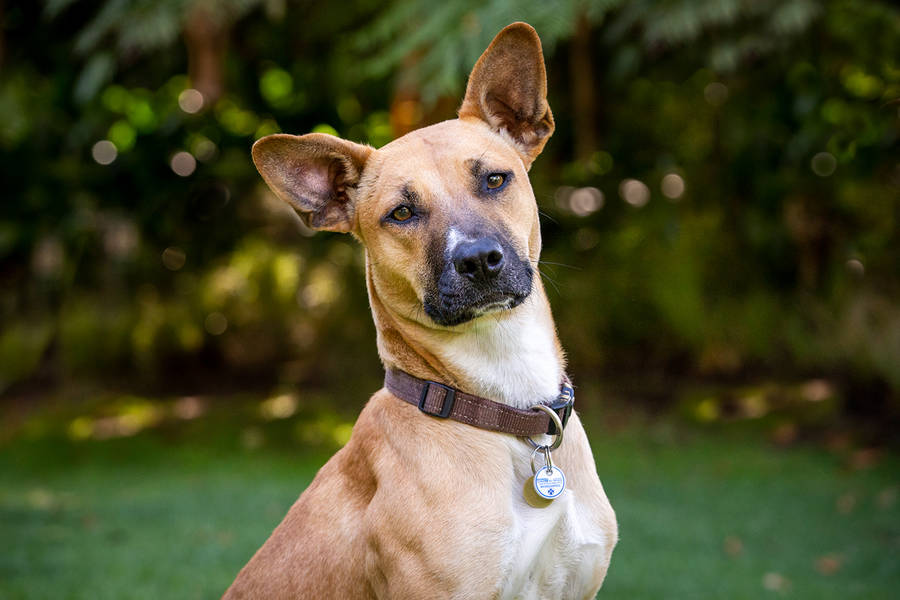 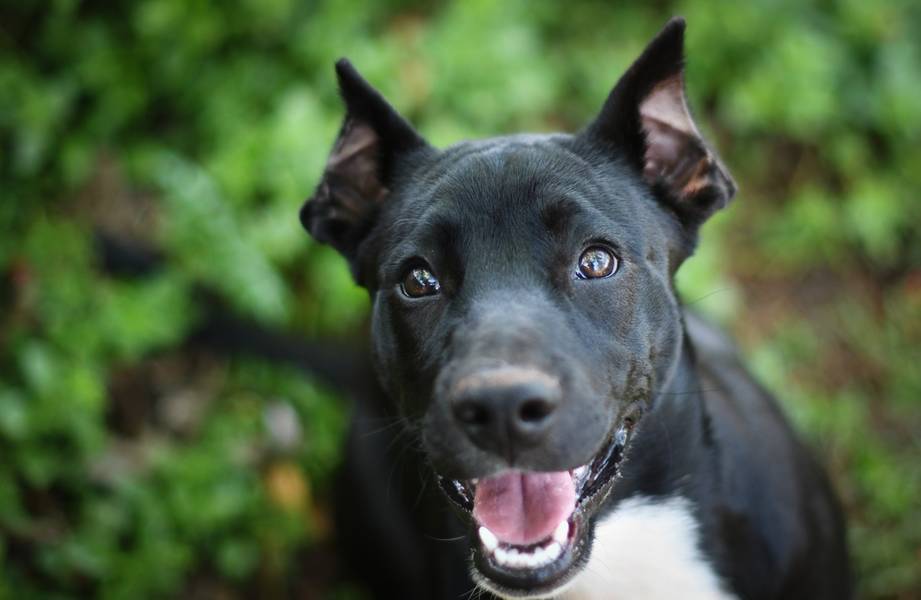 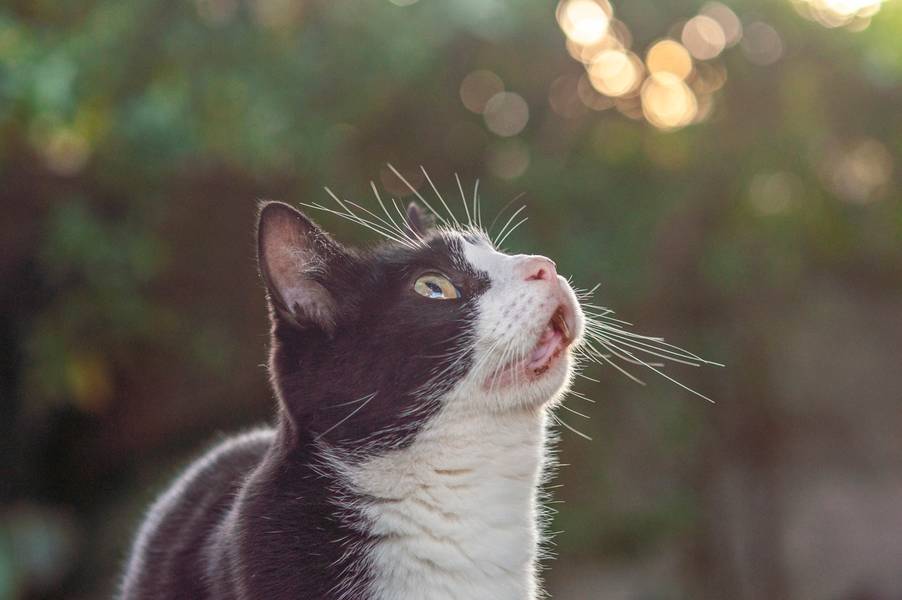 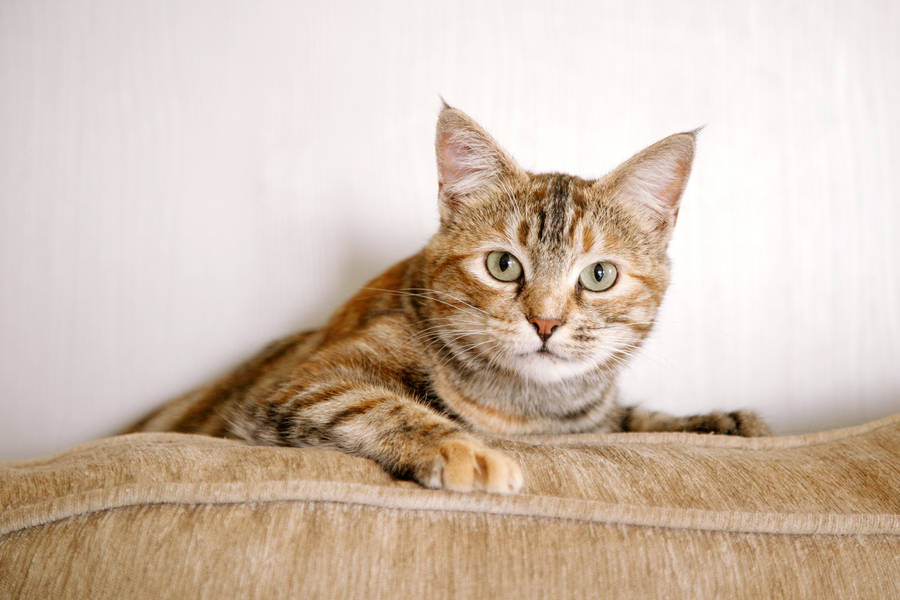 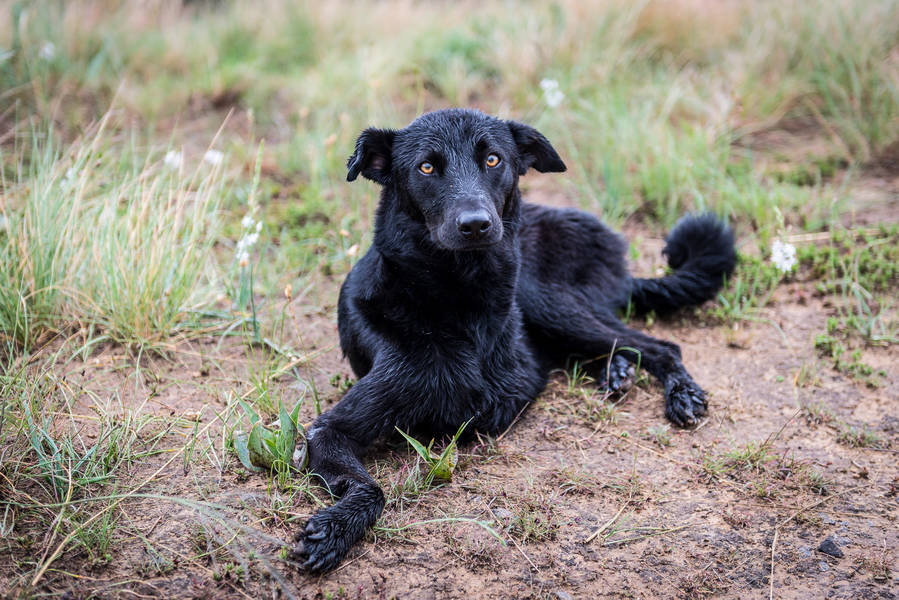