Only The Best For Beau

In May of this year, Spaniel Welfare Cape Town received a call about beautiful Beau. We were told that he was being aggressive towards the children in the house and was biting, that he was not dog-friendly and was wary of strangers. Beau was just generally unhappy in that environment. The family acknowledged this and did a very brave thing by contacting us to do what’s best for Beau. I got right on to it and went straight over to do an assessment. At Spaniel Welfare Cape Town we assess all the spaniels that come in before moving on to adoptions.

Upon my arrival, I was very confused as the dog that I saw was very welcoming and there were no signs of aggression, and he got on very well with his spaniel brother. I chatted with the family and discovered that they’d hired an aversive trainer who practised dominance methods with Beau. They had no experience with trainers before and, unfortunately, put their trust into the wrong hands, not realising that this way of working with dogs increases fear, anxiety and mistrust. This explained why Beau was so stressed out and scared. I also found out that Beau had never been socialised with children of any age before the children arrived. He wasn’t aggressive, he was just in the wrong environment, wasn’t having his emotional needs met, and was just generally very misunderstood as a spaniel.

Beau’s story is so important, because it allows us to have a deeper look into the emotional and physical needs of a dog, to understand that there’s a deeper underlying reason for certain behaviours, and it shows the importance of doing research before adopting a dog. When welcoming a dog into your life and home you need to ask the hard questions. Will I dedicate everything I need to in order to give my spaniel everything they require, physically and emotionally? Do I have the right environment for a spaniel? Will I be able to give the time and guidance needed? Have I done enough research on the spaniel breed and breed-specific traits?

Beau’s story not only offers us important lessons but also an amazing happy ending. After completing the assessment, we knew we had the perfect person for him – Paul Adant. Paul decided to foster first as he’d previously lost two dogs. Needless to say, Beau crept into Paul’s heart very quickly and was adopted. Beau needed someone he could have as his own, a place where he could relax and not be overwhelmed with things that he deemed scary. He needed a person who’d guide him in the right direction and take him on outdoor adventures.

Paul lives on an amazing piece of land, and he and Beau couldn’t be more bonded; they’re perfect together! Beau is one very happy dog and has even spent some afternoons playing with the neighbours’ dogs. Paul and Beau relax together by the fireplace and go on long walks where Beau gets to sniff the scents of rabbits, birds and horses. All he needed was the right environment and the right human. Seeing the updates of them basking in the sun and chilling out together makes every second of what we do here at Spaniel Welfare Cape Town worth it.

I’ve had spaniels bless our household for the last 30 years at least, and our new guy, Beau, is another complete blessing. I think I understand the breed quite well now, although spaniels like to throw curve balls from time to time.

Beau arrived at our home on the 17th of May and was introduced to my wife and me by Amber-Jade, the behaviourist whom we’d worked with over the past few months. We’d just been through the trauma of two of our dogs passing, and I was still battling emotionally. I’d seen videos of Beau on Facebook but was wondering whether I should take a break for a bit from having a dog. Having discussed this with Amber-Jade, I decided that fostering might be the way forward for me – that way I could be part of the solution and help many more dogs in need. Well, that was the theory anyway.

We live on a one-hectare plot in an equestrian estate and have access to the farm next door for walking dogs, riding bikes and horses – ideal to start the fostering venture that I was planning.

I’d learnt from Amber-Jade that dogs have evolved to use puppy dogs’ eyes to render humans useless to resist, and Beau is no exception here. Except he’s properly cute and has a little eye droopiness to boot! Tilting his head when talking to him is also a very effective means for him to get his way. I’d been briefed on Beau’s circumstances and possible issues, as well as the behaviour that had been witnessed and what would be required to get his confidence back on track. One of my main concerns was that he was especially timid when it came to males – tending to favour and be more trusting of the ladies. But no pressure, this was a foster, and we were going to work through it and try our best.

The intro went as well as could have been expected, but the poor dog was quite shocked to be left with strangers. After Amber-Jade had gone, he was unsure of his surroundings and was less interactive. He didn’t eat and stayed in the lounge for the first night. Being a male, I didn’t want to intimidate him and waited for what seemed to be an age for him to befriend me (up until 8 am the next morning). Patience wore thin and I thought it was best to try a more direct approach – on my lap in the lounge. Turns out it was the right move – he warmed to me quite quickly, and we’ve been inseparable ever since.

I’ve slowly introduced him to the neighbours’ five dogs (they glare at each other through the fence – well, Beau doesn’t do much of the glaring, he’s a happy little guy and definitely does not sweat the small stuff like ego and guarding). It’s almost like he has a higher level of emotional maturity (totally unbiased opinion here). The fence does form a barrier that creates a greater sense of bravery and false security. After some time, we allowed the two Jack Russells into Beau’s new turf and there were no issues at all – just wagging tales and lots of sniffing. The second option was to take him for a walk to meet the neighbourhood. Here we have a serious Jekyll and Hyde situation. It’s almost like he thinks he’s a superhuman (dog); he barks, pulls on the lead and rushes towards all dogs in sight. He can also get out of a Rogz harness in a matter of seconds; we’re working on this. He’s had no exposure to kids, so I’m not sure if that is or was an issue. He readily meets new people and is initially submissive and rolls on his side/back and waits for the new person to make the first move. He shows no signs of aggression at all, but he will bark if someone arrives unannounced.

Beau’s a very fussy eater (la de da Camembert/bourgeois hound – as he’s been labelled). I now have him on Field and Forrest with a portion of roast chicken, sardines or egg from time to time. I thought he was a little skinny when he arrived (he wasn’t eating at all), but Beau-beau has put on 2kgs, which I feel is right for him as he’s maintaining his weight with daily walks on the plot as well as farm walks throughout the week.

Needless to say, fostering failed badly. Beau is now my companion and shadow; we spend most days together as I work from home, and both of us couldn’t be happier! 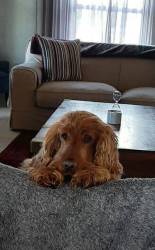 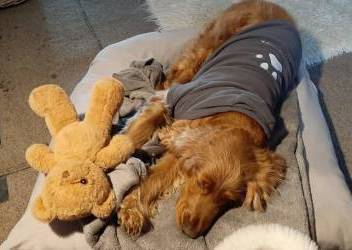 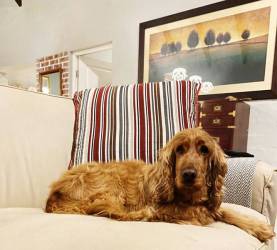 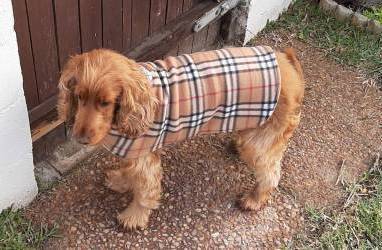 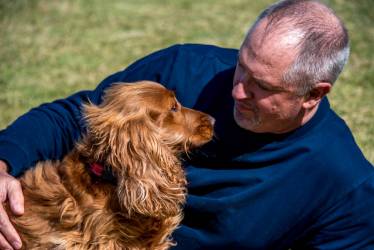 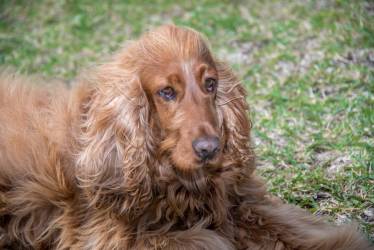 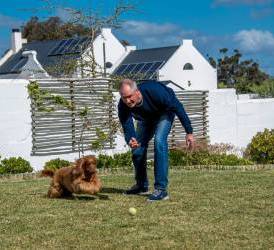 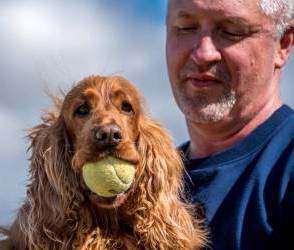 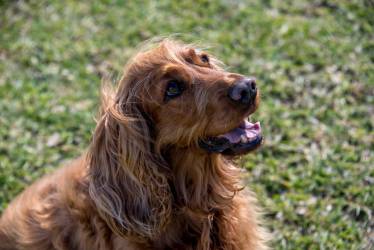 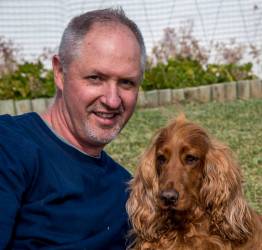 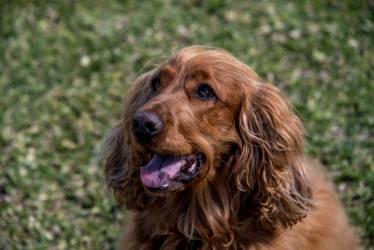 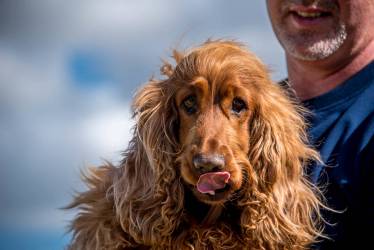 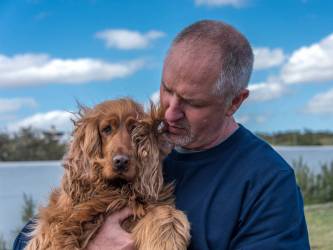 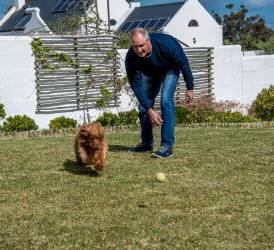 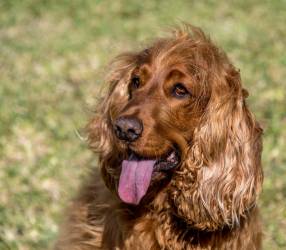 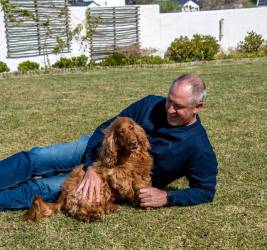 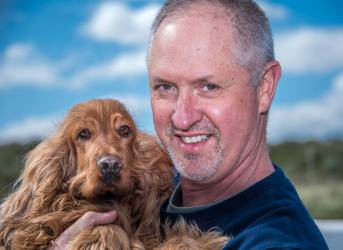 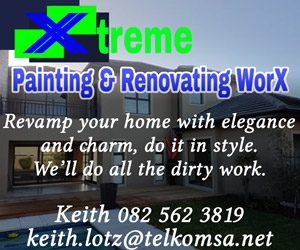 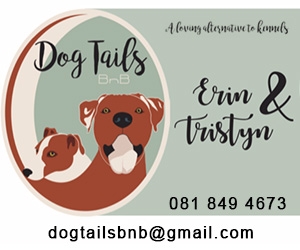 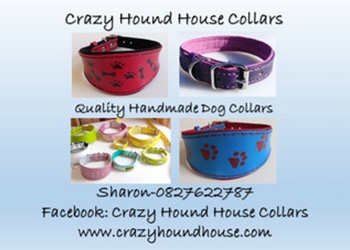 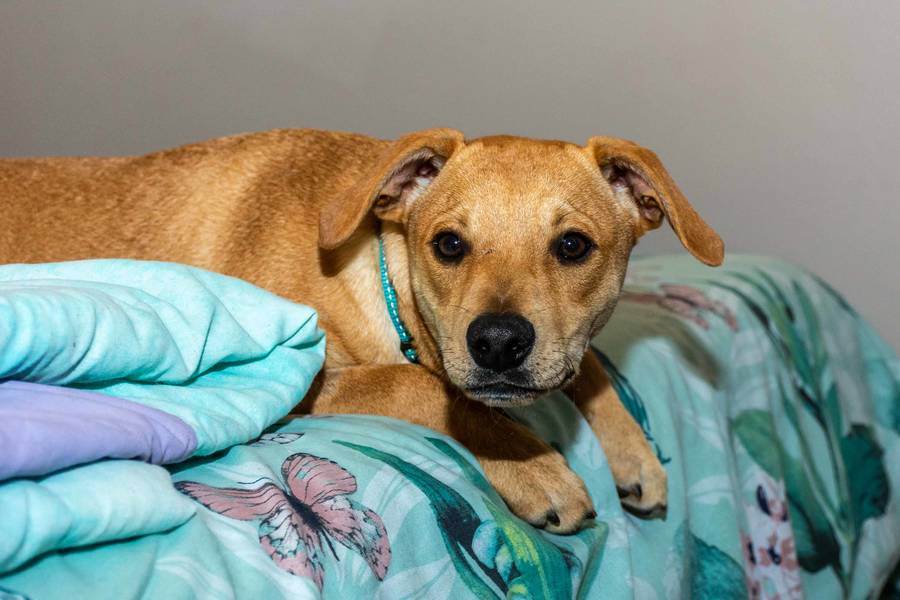 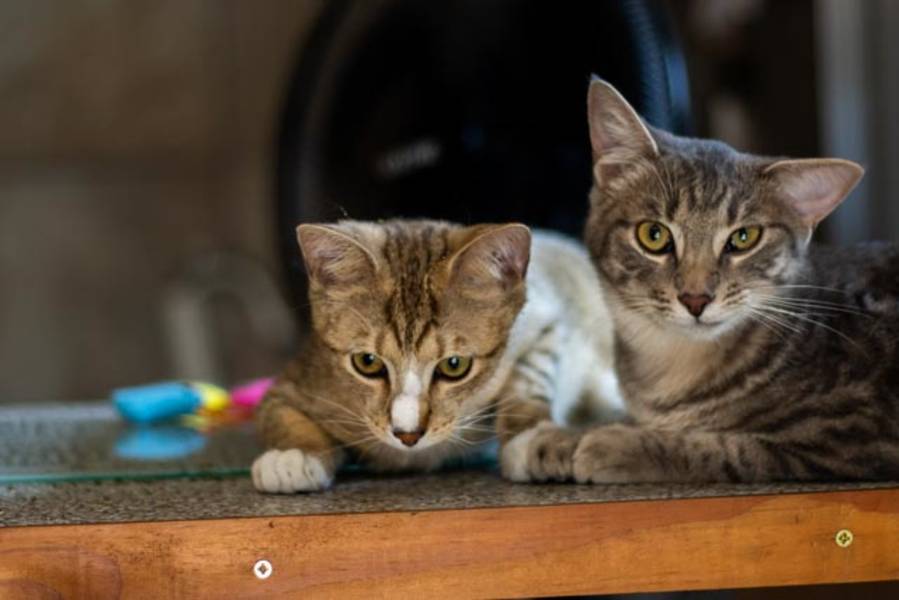 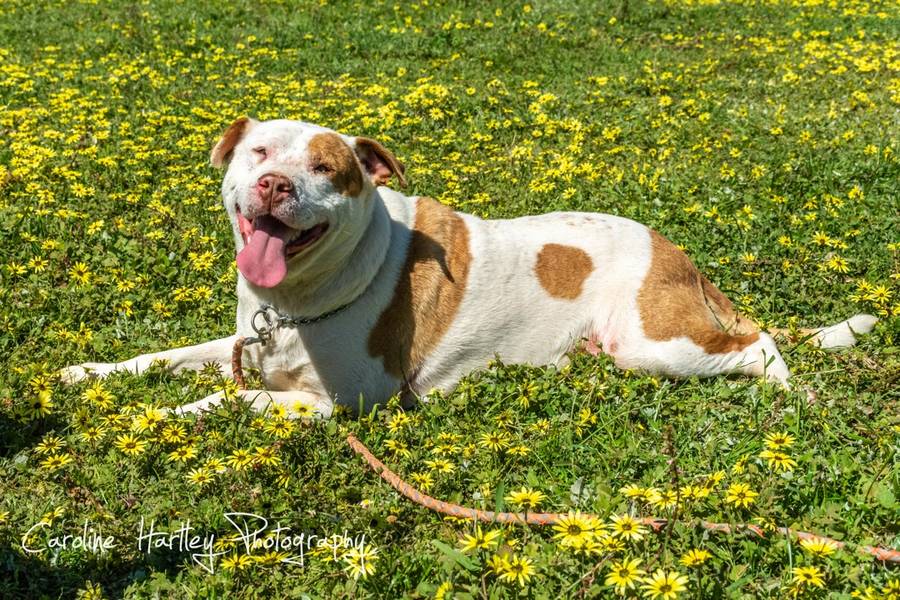 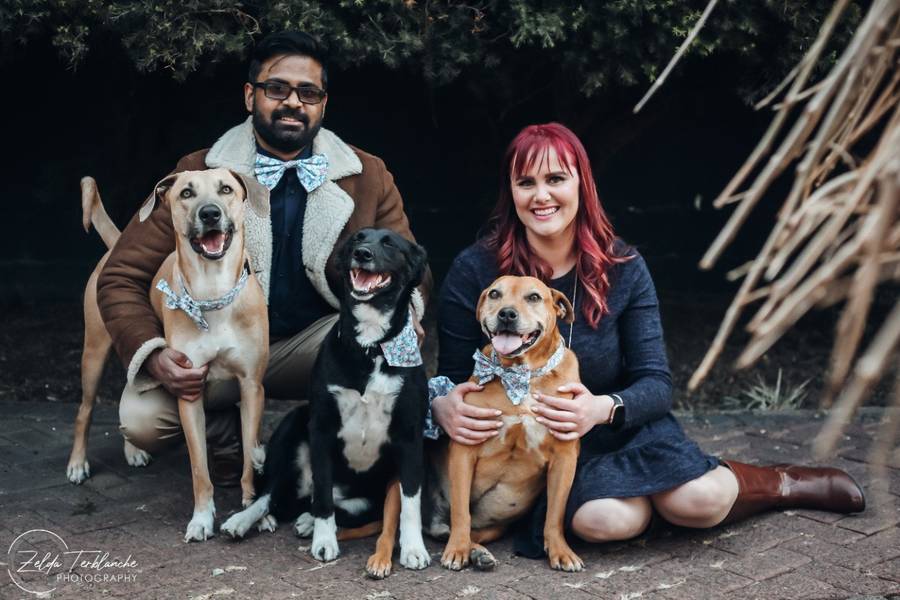 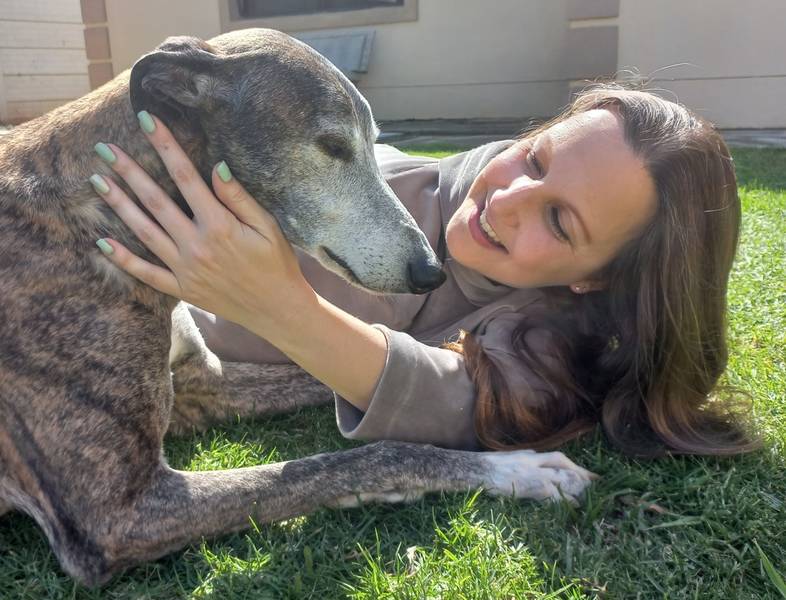