Homeopathy is fun to use and, because it works so well for many medical conditions, it’s very rewarding for me to have a veterinary practice with a holistic approach.

On 18th May 2015, I was contacted by Louisa Oosthuizen, of Great Dane Rescue, asking if I could possibly help with a Great Dane puppy which had been run over by a truck and left for dead by the side of the road.

Molly was only eight weeks old and had severe fractures to the pelvis and upper left hind leg. She’d been attended to by several veterinarians and underwent surgery by a specialist vet to pin and align the damaged hind leg.

However, after the operation, little Molly was struggling. She received fluids intravenously because she refused to eat and was on antibiotic treatment conventionally prescribed for dogs with fractures.

Ten days after the operation, the pretty, dappled puppy looked like a hopeless case. She was weak and her ribs were sticking out because she still refused food; she had severe diarrhoea, and a massive infection in the broken bone of the leg, with pus running out of the pin exit site. It really seemed so hopeless and it was suggested to humanely put the pup to sleep.

That’s when Louisa, a lady who never gives up, brought Molly to me in search of alternative treatment.

Inexpensive and easy to use

Homeopathic remedies are inexpensive and easy to give to animals. They come in small white granules or liquid form. Either form is placed directly on the dog’s gums, but I also use injections when necessary. When a symptom is cured, the remedy is stopped. If it’s not working at all, the remedy might be wrong and one has to search further for the right one. Homeopathy has a reputation for working slowly, but with the right remedy chosen a dis-ease can disappear in a flash.

Because homeopathy is an energy medicine, one cannot overdose and those tiny white granules can treat an elephant or a mouse. I’ve never had the chance to give it to an elephant but I’ve treated blesbok, ostriches, horses, cows, goats, birds, reptiles, guinea pigs, rats, dogs and cats in my practice.

For fractures, I prescribe Symphytum officinale, commonly known as knit bone or comfrey, a homeopathic remedy that speeds up healing of bone and helps fight pain.

In Molly’s case, all antibiotics had been stopped, because not only were they not helping, but they were contributing to the diarrhoea. For infection and pus, remedies like Hepar sulfuris, Myristica sebifera, Calcium sulfuricum, Calcium phosphoricum, Silica, Tarantula cubensis and Calendula are powerful homeopathic tools that help overcome infection.

Molly made a miraculous recovery, healing quickly once the homeopathic remedies were administered. Later, I also did some acupuncture to speed up her recovery, and Louisa took her for hydrotherapy. I saw Molly two years after her ordeal – today, she can run and play, and seems to be a happy dog indeed.

After graduating as a veterinarian in 2000, I spent time working in several small animal practices. This is when it became obvious that conventional medicine often had no satisfying answer for certain conditions. I began using homeopathy myself at home, and then went on to train in it over a three-year period. I qualified as a veterinary homoeopath with a certificate from the International Association for Veterinary Homeopathy (IAVH) in 2012. Since then, I’ve used homeopathy almost exclusively in my own practice, as well as in combination with other treatment modalities (such as hydrotherapy or acupuncture) or allopathic (conventional) medicine. Time and again, I have seen its benefits and successes – just as in Molly’s case.

In 2011, the World Health Organisation issued a major warning about the advancing crisis of antibiotic resistance. Overuse and misuse of antibiotics have caused the development of lethal antibiotic resistant micro-organisms. Molly’s case shows that homeopathy is a powerful alternative to antibiotics, and has great potential in healing even seemingly hopeless cases.

A word from Molly’s mom

Louisa Oosthuizen, who adopted Molly two-and-a-half years ago, says that after Molly was run over and left to die in the street, a kind passerby picked her up and called Great Dane Rescue SA, who took her to Johannesburg to their vet. She was in a lot of pain and shock but clearly had a strong will to live.

X-rays were done: both her hind legs were broken, as was her pelvis. Louisa explains that the break in one of her legs was so bad that she had to go to a specialist vet in Pretoria where a pin was inserted. Although they gave her strong antibiotics, her leg became very swollen and a bad infection developed around the pin. Things were looking bleak – that’s when she decided to search for a holistic vet to help her.

GDRSA suggested Dr Anita Schwan at Heatherdale Veterinary Clinic. She treated Molly with homeopathic remedies, which had to be administered several times daily, and, later, hydrotherapy and acupuncture. The difference was amazing – her leg recovered completely from the infection. Today, she is one happy girl running around with Louisa’s 10 other fur kid family members, and although that leg is shorter than the others, it doesn’t stop her from enjoying life and having fun with her family. And she is very much loved. 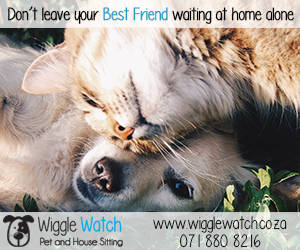