It surprises many people to learn that humping is not so much about sexual activity. It’s usually a response to stress, anxiety or excitement.

While the behaviour is “normal”, there are clearly times when it’s not acceptable to humans. Like when elderly Aunt Mathilda comes to tea and gets humped by Fido. It’s also often an attention-seeking activity – and all the “stop thats” are in fact regarded by the dog as attention. Dog-on-dog humping is acceptable in short bouts as part of play if the other dog is agreeable, but it could lead to aggressive behaviour and thus needs to be controlled. Interestingly, not only male dogs do this – occasionally females will do it too, which can confuse owners.

Reducing or eliminating the behaviour is desirable. As with any unwanted behaviour, the longer it has persisted, the more challenging it is to work on. So, early intervention is recommended, even with a puppy.

An obvious cause for medical intervention is the need to neuter the dog, which reduces his need to hump. The hormonal component fades within a couple of days following surgery, and being calmer, he’s less likely to hump.

It’s also worth checking in with your vet to eliminate any irritating or painful causes. Bladder infections, allergies, etc. are possibilities. Proving there’s no medical condition to be concerned about, it’s time for behaviour modification.

Since stress is a causal factor, work to reduce the stressors to which the dog is reactive.

This would include, for example, social gatherings where there are people milling around and interacting. If it’s fairly calm, tethering the dog in the same room is an option so that he’s part of the situation but safely away from those ever-so-desirable legs just waiting for a good hump.

If there’s elevated activity, he should be kept in another room in a safe space so that there’s no need to deal with the unwanted, and sometimes embarrassing, behaviour.

Dogs often become highly excited when meeting and playing with dogs they interact with when out and about (at the dog park or out on a walk). To help you keep some control over the situation, a long light nylon leash (five metres) is recommended, or a short tag (50cm).

Allow your dog to play, but keep an eagle eye out for any signs that he’s about to hump other dogs. In the early stage, you may be able to block his intention by standing in front of him to keep him away from the other dog until he calms down. If the behaviour is well-entrenched, you’ll need to work with “time out”.

Time out is helpful in any situation where the humping is inappropriate – as above – or in social situations. Pick up the leash and, with a happy voice, call “oops” and remove him from the situation. The use of “oops” is called a non-reward marker in that it signals that no treats or praise is on the immediate menu. At this stage you might feel inclined to start the “bad dog” loud voice treatment – this is neither necessary nor helpful. It simply stresses the dog further.

This behaviour is unacceptable and requires direct intervention; the earlier in the scenario the better. Again, watch carefully to pick up on any signs of intention to hump, and intervene as fast as you can. Then, follow the same route for “time out” as above.

Training should be done with a friend who understands the nature of the problem and what you’re doing to fix it. Aunt Mathilda is not a likely candidate. Nor is your boss when he comes to dinner.

All dogs should have a default cue (or command) such as “sit”. When the dog does something that is unacceptable, one requests the default behaviour. Once given, copious praise and treats are provided so that the dog learns that this behaviour signals yummy stuff and, therefore, in dog world, this is a good thing to do.

Sometimes the dog becomes obsessive with an object it likes to hump, such as a toy or scatter cushion. If this is regular and of extended time, we’re looking at obsessive behaviour, which is best tackled by a qualified behaviourist. It may include medication or muzzling to help the dog.

Remember that a “learned” behaviour takes time and patience to alter. The longer the dog has practised this behaviour (and maybe owners have initially found it funny and given attention), the longer it will take to reduce and, hopefully, eliminate. 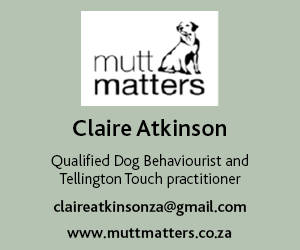