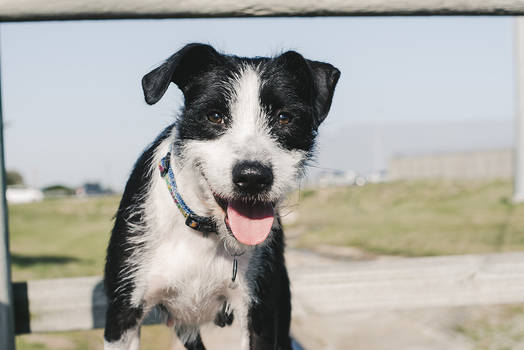 It’s taken seven weeks of preparation, expectation and excitement. And it all started five weeks after lockdown.

I’d only been in my new home for three months, doing my work with a fibre company, as well as my extra-income job of caring for animals while their parents were away on business or holiday.

I love animals, so it was a natural and lucrative way for me to earn money, and I didn’t have any furry babies of my own. It would be unforgivable having left my own three beautiful dogs with my partner in another province after a 12-year relationship. There was always a “hope” that I’d be with them again.

My new landlady had two very small dogs, and she was keener for me to adopt one, and even more keen for it to be a large robust dog, as were the ones I’d always raised for the last 25 years.

On the 26th of March we were in Lockdown, and I was ready to cope with three to six weeks of being entirely on my own. I shopped for food and drinks that I thought would be enough for three weeks, and it certainly wasn’t.

Five weeks later I began feeling extremely anxious. Things were getting worse all over the world, I hadn’t seen my grandchildren, and it occurred to me that I might not see them ever again. I was terribly lonely. After picking up my meds one beautiful Saturday morning, I took a sneaky drive to the beachfront. Not another car, person, animal or ship in sight; only the crystal-clear, calm water and white sands of the beachfront and the majestic Table Mountain. I burst into tears. Will I ever swim again, walk dogs on the beach, and have fun with my grandchildren, watching them learning how to surf, play rugby or cricket? I was devastated.

The idea began to form: I should adopt a dog.

I phoned my friend in Port Elizabeth who works closely with a shelter there for advice, and in no time we were looking. Of course, I couldn’t get one from another province, as we weren’t allowed to commute, so I started researching in Cape Town. Fifty days into lockdown I put in my application to Fallen Angels for a puppy. I looked for Rottweilers, Bull Mastiffs – those breeds – but decided that a small- to medium-sized dog would suit me best.

Photos were sent, characters were analysed, and backgrounds checked (including mine). Then came the Atlantis rescues – six one-week-old cross terriers needed adoption. I was smitten – not with the pups, but with the sad, forlorn eyes of the mom. She was scared and thin, and she’d be put in the shelter alone, probably for the rest of her life. Oreo was going to be mine. I renamed her “Biscuit”.

The only background information I had on her was that she was found with a batch of 17 dogs, was very pregnant, and extremely malnourished. She literally was skin, bone and very little fur. But my friends and family assured me that with all the love I had to give she’d turn into a Princess.

Her foster mom, Lucindi Storme, and I communicated daily with photos, videos and updates on her and the puppies’ progress. I bought the food, bowls and jackets, whilst friends gave me passed-on beds, leads, toys, blankets and a harness. I was ready for the new arrival.

A week before Biscuit was to arrive, we arranged a meeting, so to get her used to me and something she’d be familiar with when she got home, I took over her bed, a well-worn t-shirt, and her blanket. Yay, I was about to meet my little girl.

For me it was a disaster! She barked and backed away as I slowly bent down to stroke her, a reaction from animals I never get. It wasn’t as though her puppies were around, either. I began to worry if I’d done the right thing. She kind of accepted me when giving her a few treats, but there certainly was no wagging of the tail.

Luckily, being Mother’s Day, I was going to see my grandchildren, and the family had decided to break the rules and get together, so my sadness was somewhat alleviated.

That week, the foster mom brought Biscuit for a visit for an hour or so, and then, two days later, she dropped her off for a play date. Things had improved slightly, so when she arrived on the 25th of June, I felt excited and ready to welcome her home.

At first it was like having a newborn baby in the home!

Biscuit arrived in time for her evening meal. I reported to everyone the next day that the night went well. She slept until 8 (which is late for me), I fed her, cuddled her, and tried to carry on with my day. And she whined and whined. I gave her a little extra food at lunchtime, but she cried even louder. I checked her stool… I tucked her in her blanket and did what I could to soothe her. She got treats, she got walked, but nothing helped. Then, finally, that afternoon she fell asleep, and when my bladder was bursting, I didn’t want to move from the couch with her, lest I wake her. Crazy stuff.

Saturday morning I had to wake her again for breakfast – the weather looked lousy, and we expected heavy rain, so Biscuit and I went for a half-hour walk, which turned out to be 15 minutes when the weather changed. We got home just in time.

She was far more settled though that morning and only had a few whines as we sat snuggling on the couch in the cold. The rains came down with a vengeance. An hour later, I got up to make coffee and walked into a pool of water. My house was flooded, carpets soaked, and I panicked. I grabbed every towel I could find, called my landlady for help, moved furniture, tossed carpets out and began the mop-up whilst dear old Biscuit watched on as chaos reigned. Fortunately, the lounge area was okay, so we both settled onto the couch under blankets and waited for the storm to pass.

The days passed as we slowly got into our routine; she came to the shops with me, walking, playing outside with her favourite toy, and getting to know the other dogs. But the cat wasn’t her friend, and she intimidated her by sitting at the glass door and puffing herself up. Biscuit wouldn’t venture outside if the cat was around.

But her confidence was growing; she had a bath, a long walk, and I could feel her getting stronger. Already I could see a change in her coat and skin.

And then the tortoise paid the garden a visit, and Biscuit found it, sniffed it, and as it put its head out, Biscuit took off in fright and onto the couch. That’s when the barking and growling began, and it never stopped the whole afternoon. I closed the curtain and tried to console her; I moved Torti to another part of the garden, but it did little to placate Biscuit – whilst I tried to continue with work. And with all this new confidence, she saw the cat and took off at her like a bat out of hell, telling the world that this cat would no longer intimidate her.

We’re a few weeks down the road now, and Biscuit has settled into life with me (mostly) and begrudgingly with the cat and the tortoise. I’m so happy to have her as part of the family. Having recently learnt that my landlady has put the house on the market, my next challenge is to find a pet-friendly home for us all. 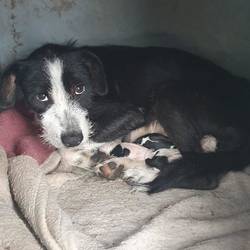 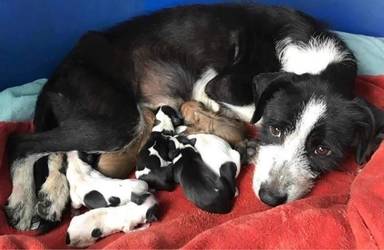 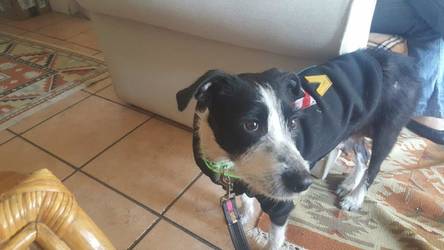 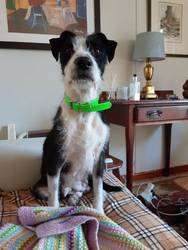 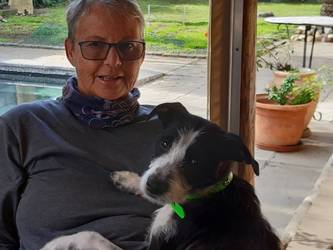 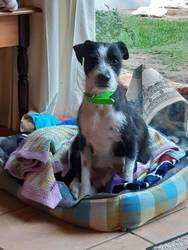 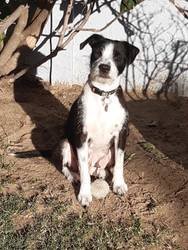 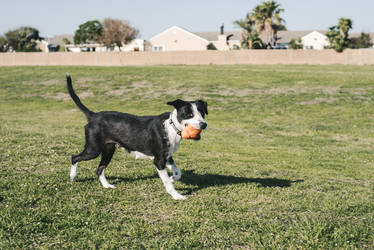 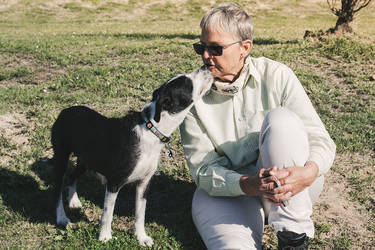 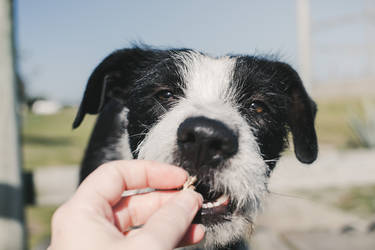 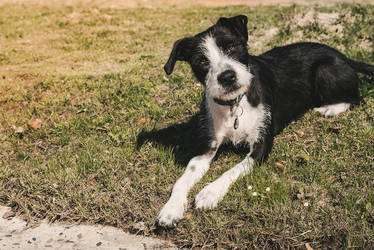 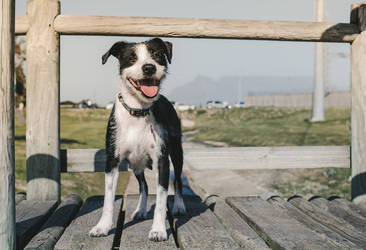 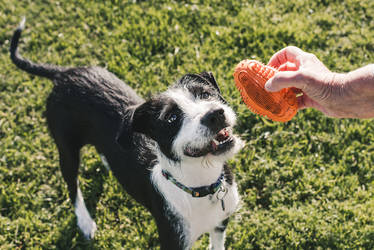 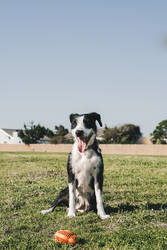 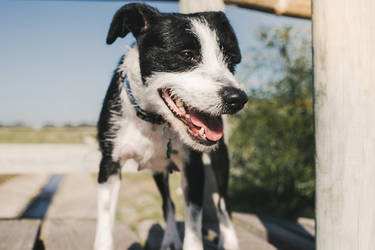 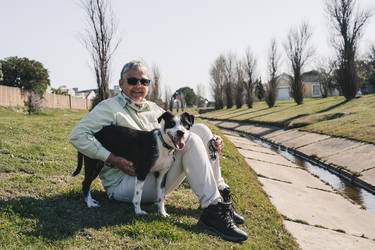