A perfect home for Penelope 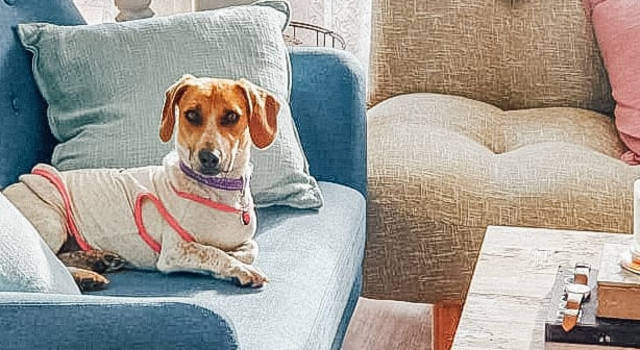 One night in August 2019, we were contacted by a friend in rescue who asked if we’d take in an emaciated and injured dog. The images of the skeletal little white-and-brown dog tore into our souls, and we immediately agreed and started our scramble for an experienced foster home.

The problem with the dog was a double whammy. Because of her starvation and injury, she’d need to be fed carefully while being caged and taught to be a dog – all at the same time.

Feeding up and providing loving care for an emaciated dog like Penny isn’t as easy as it sounds. There’s such a fine line to walk, because, sure as nuts, if you’re not sparing with your affection, the end result will be a nasty creature who feels the urge to fight for every scrap of attention and food. It can also be dangerous to overfeed a starved animal too fast. So, the first order of the day is to start feeding small quantities of food, but often. The most difficult part is defying your human need and urge to cuddle and love the poor thing.

So, you have to do all this from a “distance”. You have to become the dog’s slave, but without allowing your emotions to interfere with the work at hand.

Cage resting a dog you’re unfamiliar with is trial and error – you have to allow the dog to teach you what their needs are. But Penny was easy. Kind and sweet with a graceful and grateful attitude, she assisted us by accepting her cage with a dogged determination to get better. It was almost as if she understood that being in her cage was curing her.

During this time, Debbie Lourens, who’d rescued Penelope off the streets, kept in contact and wanted to visit. Initially we declined, as we needed to keep Penny as quiet as possible, but eventually Penny’s bones healed and she was allowed out of her cage for extended periods. And so it was that Debbie and her dear husband came along to present Penny with some gifts and cuddles.

Despite her shyness and having grown a particular attachment to my husband, Penny lavished Debbie with cuddles and kisses. I was ever-so-slightly offended, as Penny had yet to offer me any.

Debbie swore that day that she’d adopt Penny. I was dubious, as Debbie and her husband were living in a flat, and now that Penny was healing, she was proving to have boundless energy.

But Debbie said she would move.

Let things happen as they must

Having been involved in rehoming dogs for several years, I can put my last bottle of wine on the line that this must have been only the second time that I’ve known this to happen – that a person would uproot themselves to move from a flat to a house so as to adopt a dog. I’m usually on the other end of things where unfortunate sad and broken people are handing me their dogs to rehome as they’ve had to leave their house to move to a non-pet friendly flat.

Anyhow, it was what it was, and in rescue, the one thing you learn early on is to let things happen as they must. So, I waved Debbie goodbye that day thinking that, when the time was right, Penny would be advertised and a new home found.

But Debbie was true to her word. It didn’t take her long to find a home suitable for herself, her husband… and Penelope, aka Penny. In fact, she moved in September or October and quickly got their nest ready for Penny. If my memory serves me correctly, Penny was just reaching a stage where she was ready to be rehomed, having slowly reached her goal weight (if still a little skinny for comfort) with her bones all healed and, believe it or not, not a trace of food aggression or resource guarding.

Penny was proving to be a delight and a sweet girl who had loads to give.

And so it was that Penny was handed over to Debbie. She didn’t give us a backward glance or bother to say goodbye as she left our care, clearly with the understanding that “this is now my Mom, and thanks for your time, but I’m outta here”.

And that’s when you pat yourself on the back and dry your tears. When you can send a previously emaciated, broken dog off into the world as a healed, well-balanced, social being that doesn’t look back, you know you’ve done well. You know that your pain is your reward for healing her. It’s your gift to her.

I’ve moved on now from Penny, as I must. It’s been made easier knowing she’s doing well, and seeing the photos that Debbie sends me are what makes it worth it, and it also helps one heal.

It was Monday the 19th of August, a day I’ll never forget. My friend Melissa and I were on our way back to my flat after gym. While waiting at a traffic light, we both saw an incredibly emaciated little white-and-brown dog limping across the very busy intersection at McDonald’s in Parow.

Hit by a car

We immediately thought to take her to the nearest vet. We stopped the car and I proceeded to follow the little dog across the bridge. She was clearly very afraid of people (she still is very wary), so I tried not to frighten her, but, as I followed her across the bridge, my worst fear was realised: some people came towards us from the opposite direction. They saw that I was going after the little dog and, probably intending to help, tried to block her way. It spooked her so much that she ran off – straight into oncoming traffic.

As if in slow motion, I saw a blue car approaching. I sprinted after her to stop what I could see would happen. But, although the blue car slammed on the brakes, it wasn’t enough, and the car hit the skinny, scared little dog.

With adrenaline freshly pumping through her, she dragged herself up and took off again. I must have followed her for about a kilometre before she eventually started to run out of steam and slow down. It was at this point that Melissa found us (having gone to buy some food to try and coax the poor thing to come to us).

With her help, we finally managed to catch her. Melissa took off her favourite denim jacket and covered her exhausted little body up to keep her warm. It was at this point that the dog started urinating blood. We both freaked out and rushed off to the vet.

Make it through the night

The little dog had a very bad cut on her hind leg right down to the bone (which the vet cleaned), she was extremely dehydrated and thin, and she had no hair in many spots of her face and body.

The vet told me that she doubted she’d make it through the night, and it was likely that they’d have to put her to sleep. But I refused to let that happen. So, I ended up going to the vet every day, from opening to closing, sitting with Penny, as our little rescue is now known, to make sure that she wasn’t put down. I thank the one particular receptionist for letting me visit with Penny every day.

We would lie in the sun together and I’d tell her how much I loved her. I think, in my heart, I’d already known she was mine. Things just needed to fall into place to make it come true.

Getting the care she needed

It was on the second day of Penny’s care at the vet that a friend of a friend helped us and got in contact with the angels of Cape Dachshund Rescue. They were able to take Penny into their care. She was moved to a new vet, and only then did she get the proper care she needed.

We learned that she had a broken pelvis and needed cage rest and very careful care. Words can’t express the depths of gratitude I have for Greer Rees (Vice Chairman of CDR) who took on the incredible task of looking after a badly broken baby and teaching her to be a dog again.

I won’t lie, it hurt when I was told that I couldn’t see her, but I understood. I just missed her so much already. By this time I was very attached to her, so it almost felt like I was losing her, even though I knew she’d be getting the best possible care.

Two weeks went by while Penny slowly recovered – and then, to my joy, I was allowed to see her.

I still remember Greer advising me that I shouldn’t get my hopes up when I saw Penny – because of her traumatic experience, she might not even remember me. But as I walked into Greer’s garden, Penny came running towards me, licking my hand and blessing me with her affection. Right then, I made up my mind: come hell or high water, I was moving so that Penny could come home (with or without my husband, ha ha).

Fast-forward two weeks of actively looking at pet-friendly places (which is almost impossible these days, by the way), and I happened upon a little place in Flamingo Vlei. It had a porch and a lovely little garden (two of my greatest wishes) and, location wise, it was two streets away from Penny’s foster mommy.

And here’s the kicker: the street is called Penny Lane; I knew it was meant to be. I just needed to convince the homeowners that it was meant to be, too. Fortunately, one look at Penny’s soulful eyes secured us the lovely little cottage.

Then followed two weeks of packing and trying to get funds to move. We’d been living in the same place for 13 years, so you can imagine how that packing and moving went. We also lived on the third floor… and there’s no lift. So that was super fun. But it was so worth it.

On the 1st of September we were finally in our new place, trying to create some living space amidst the chaos of clutter. The next day, while I was unpacking the dishes in the kitchen, my phone pinged with a WhatsApp message: we could come and get Penny. We left everything right then and there to go fetch my baby.

It wasn’t long after that that I received the formal “all clear” to adopt Penny, and she officially became Penelope Dash Lourens in November 2019. Dash, in honour of a friend who had a Dachshund for 16 years and, after her passing, kept all her toys and blankets because she couldn’t part with them until she read Penny’s story and kindly gifted me the most amazing things for Penny. So we wanted to honour Dash’s memory in that way. The full name only comes out when Miss Penny is being a bit naughty and carrying mommy’s slippers around, though.

Penny still has a long way to go. I’m the only one she fully trusts, although she does have a deep love for our pet sitter, Suzanna (leaving me slightly jealous), but she’s still very wary of people. She does adore dogs, though, and when we walk past a certain house, she always stops and waits for her friend Kai to come to the fence to greet her.

Our lives have been completely changed because of all the events that occurred last year, and despite facing 2020 with its new set of hardships and challenges, I’m thankful for my sweet Penny, who’s been an incredible source of comfort and support to me.

She truly is my soulmate. 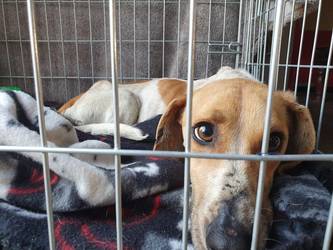 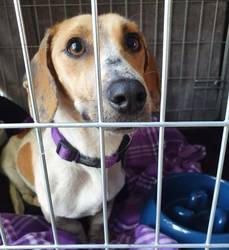 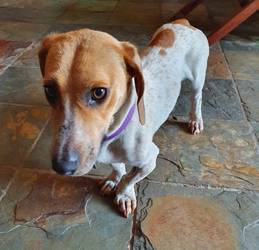 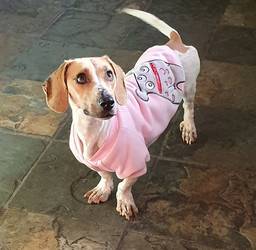 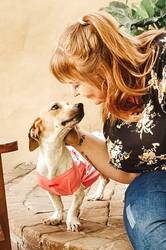 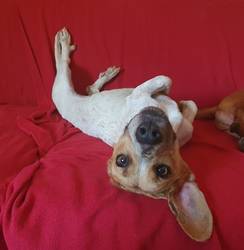 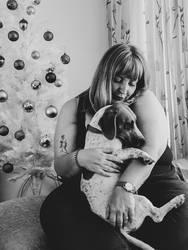 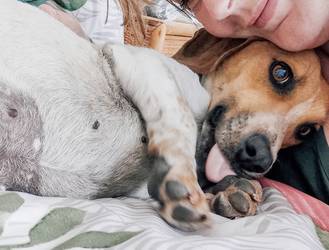 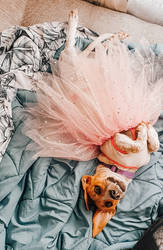 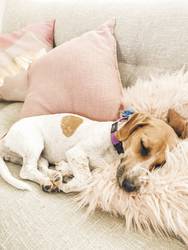