When Karin Watling, co-founder of The Sasha Fund, saw Billy the Hound on the Cape of Good Hope SPCA’s Facebook page, she knew he was something special. Karin shares Billy’s story with Happy Tales.

I’m blessed to live on a farm in the Swartland now. I previously lived in Noordhoek for 22 years, adopting TEARS (The Emma Animal Rescue Society) in that area but having my pedigreed Pointers and Bouviers too.

My dear and longstanding friend, Gaynor McVitty, my partner in our animal rescue project for the last few years – The Sasha Fund – lived on a farm in Paarl when we first met.

We met because we adopted Pointers who’d been left to roam in the National Parks land of Hout Bay. We loved our Pointers and became firm friends in doing so. One by one, they needed to go to the Rainbow Bridge. Gaynor left her farm; I was still in Noordhoek (we came to our farm ten years ago).

A love of spotted dogs

Gaynor and I often spoke about our love for the “spotted dogs”, as we fondly referred to them (though in reality, of course, the English and German Shorthaired Pointers are mainly “patchy”, some with some “spots”).

So, when I spotted Billy The Hound’s picture on the Cape of Good Hope SPCA’s Facebook page, I was arrested in my tracks: there was this extremely handsome partly-patchy, partly-spotty person. I haven’t had one since McGyver and Karli passed on, but Gaynor does have one – Ozzie, a Pointer-Dalmation mix; she also has an “old girl” Ridgeback mix.

“What is Billy?” I mused as I perused the various pics posted. An interesting mix... could be part Foxhound. Even a little bit of Bloodhound, perhaps. Some GSP blood. Maybe some English Pointer. The end result is this super-dapper young man.

And so, I went to visit him – an eye-opener to say the least! He bays up a storm, so living in suburbia is out. I’ve never had a baying dog before, and Billy is a hecticly vocal person. And completely out of control – he dragged the animal behaviourist from the kennels to the exercise enclosure. No ears and no idea of respecting personal space. At all. He jumps up; potential to knock someone flying: four out of five.

An interesting challenge BUT the dearest soul – licky, looky, lingery, touchy: loves people and attention. No amount of affection is enough for Mr McVitty. He’s interested in everything – nose in everything, up everything and on everything. This needed some thought and consideration…

Never one to not be pioneering or to back off from a challenge, I filed him in the “Possible Box”. I thought: “Let’s see if anyone else takes him…” They didn’t.

I didn’t give it very long, to be honest, because, truth be known, I’d fallen in love with him on sight. The poor soul had been picked up as a stray in Ottery. (I can, of course, imagine someone not coping with him.) It wasn’t long before he joined us on the farm.

Once home, we went on to discover that Billy is actually Spiderman in a Hound/Pointer costume; he scrambled over our 1.8m-high fencing – strategically (‘cause he’s super smart!) at the corner right angle, where he could get traction from both fences and pole.

A match made in heaven

But the main driving reason for adopting Billy into our Sasha Fund De Goede Hoop Family was that Gaynor was about to be married. She requested no gifts, but I knew that to adopt this patchy, spotted person in celebration of her marriage would further fill her heart with happiness.

He’d have to live on the farm with me because he makes such a blood-curdling Vincent Price horror movie noise… every day… for any reason when he wants to say anything. But he’d really be Gaynor’s guy. I ran it past her – with photos (of course, she’d be destined to be a dead cert then). She was delighted and named him McVitty. We’ve kept the Billy part, so he’s moved from Billy The Hound to Billy McVitty.

It’s a match made in heaven. Look at the McVitty’s together in my garden, choreographed and captured so beautifully by talented and super-experienced animal photographer Johann Theron. (Thank you so much, Johann, for creating art that afternoon.)

Now, the science is continuing to work on ears in operation (nothing wrong with the brain!), a sense of personal space, four feet on the ground preferably please, no towing allowed, nose not in/on everything all the time.

But what would life be if not a blank canvas in progress every day?! And some things just need to be accepted, in fact, embraced: Billy McVitty is a potential Moaner Lisa! 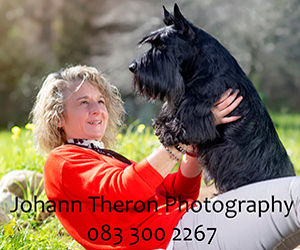