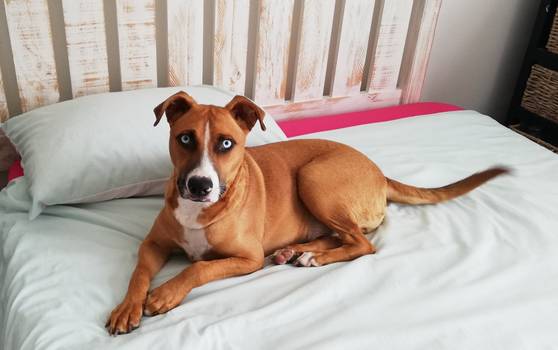 During the early hours of Christmas Day in 2019, I received a call from Russell Moore, who’d been advised by Arnold Slabbert to call me for advice. He’d caught sight of a dog in a terrible condition with a huge gaping wound on his neck. I coached him on how to catch the dog and suggested he take him to the nearest vet. Noticing a woman’s stocking embedded round Blue’s neck, Russell managed to remove some of it with his pocket knife, but it was too deep to remove entirely.

Russell contacted Mount Croix Animal Hospital and Dr Andrew Mackay, who, without a moment’s hesitation, arranged to meet him with Blue at the practice. Russell says, “They were incredible; I cannot sing enough praises over Dr Andrew Mackay and his team – they were excellent, and their passion for animals was clearly visible.”

Blue needed immediate medical attention; three operations were scheduled to remove the stocking, and further surgical treatment was required. We decided to neuter Blue at the same time.

Later that day, I posted the finding of Blue on social media. It was an appeal for his owner (thinking that he might have been stolen) to come forward, as well as a request for funding for his medical procedures and a home in the event of no owner showing up.

Anel van Eyk saw the post on Facebook and later told me that it upset her so much that she immediately decided that Blue would go home with her if no owner appeared. She regularly visited Blue at the surgery, where he stayed for quite a while whilst recuperating – it was love at first sight.

Blue went into foster care with Christell Nicholls. Anel formally applied to adopt Blue, and after a home check was successfully conducted, we could arrange for a meet-and-greet with her little girl, Dixie.

On the 7th of January, 13 days after he was found, Blue went home to Anel.

It hasn’t been easy, as Blue had no “social graces” and needed to learn basic manners, home obedience and, of course, the dreaded house training. He also didn’t respond to his name, or any name for that matter. So many firsts for him: TV, mirrors, glass doors, full tummy, security, and tons of love… It was evident that this boy had lived on the street for a very long time.

Blue is a clever boy and has quickly fitted in to his home. He’s totally besotted with Anel and follows her everywhere. His favourite place is sleeping almost on top of her. When Anel is in the bath, he’s next to her; when she’s in the shower, he tries to get in with her; and when she cooks, he’s good on his bed but never takes his eyes off her. He knows she rescued him, and he adores her.

It took a while for Blue – or Boeta, as he’s now affectionately called – and his new little sister, Dixie, to get used to one another. Dixie was an only child and understandably not keen to share her mom’s love. She’s a little Min Pin and so much smaller than Blue. They have, however, become best friends and play up a storm. Blue is extremely gentle with Dixie.

Anel saved Blue, but she’ll be the first one to admit that he did indeed save her. Anel’s goal was to help Blue lose the fear and pain in his beautiful eyes. All she wants for him is to be a happy dog. The “work” is not done, but their love affair is strong, and the bond will last an eternity. 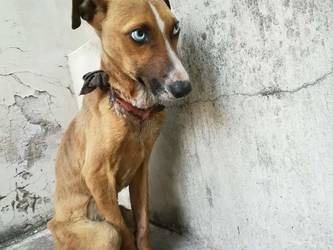 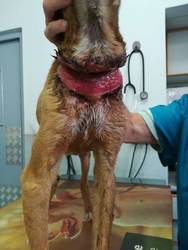 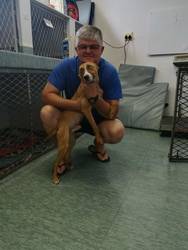 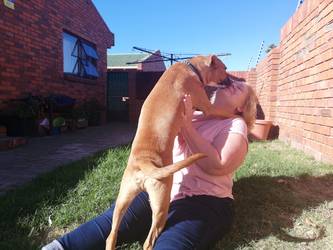 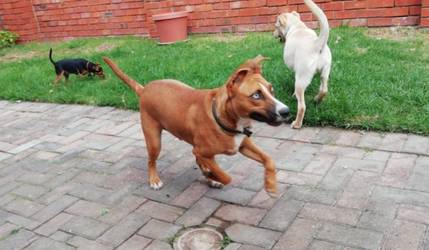 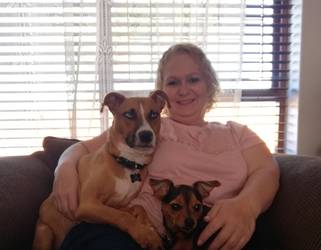 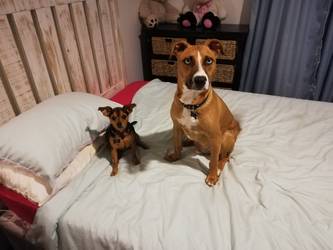 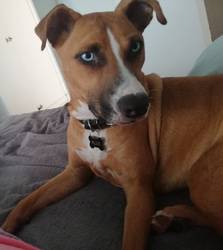 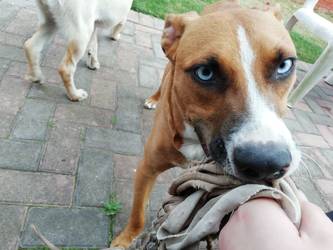 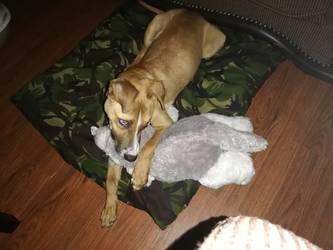 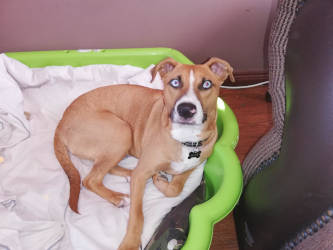 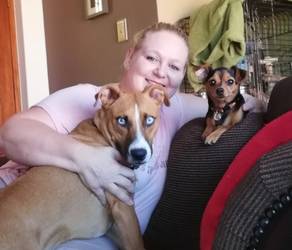 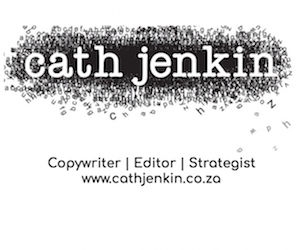