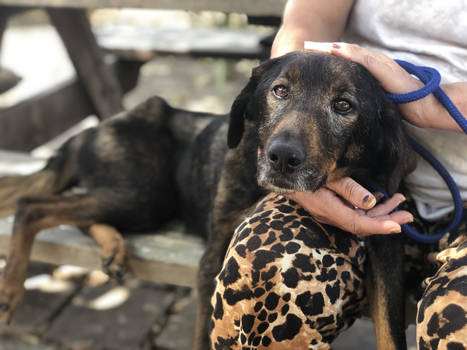 Written and photographed by Melanie Jessop

As you’ll know, there are many networkers on Facebook who scan the numerous lost and found pages, and other community pages, trying to reunite dogs, cats, birds, even tortoises, with their humans. This informal endeavour is simply a bunch of people – who often only know each other via Facebook – comparing photos and descriptions of lost pets and found animals, hoping to make a connection, and finally seeing those joy-inducing words appear at the top of a post: “Back Home!”.

On the 31st of December, I came across a post on Brooklyn Streets Facebook page, written by Debbie Rosslee, which referred to a “Girlie” and “brown hair with red colour” and “looking for her”. It was unclear whether this was a cat or dog. It was a bit of a forgettable post and one that I worried would get overlooked. I made contact with Debbie via Facebook Messenger to try and obtain more information to create and share a more comprehensive post on all relevant pages, preferably with a photo too.

As it turned out, Debbie’s phone was old and had lost all its photos, so there was no photo of her dog, Girlie. Another family member, however, had a photo of Girlie’s father, Rocky. He looked similar, so we decided to at least use that. I learned that the events that led to Girlie going missing were as follows. Debbie put Girlie into their yard with Girlie’s mom, and the (human) family went inside for an afternoon snooze. While they slept, the wind picked up to gale force, blowing down the gate and barricades that were blocking the yard from the street.

When Debbie woke up, her son said that Girlie wasn’t in the yard, and both her sons went walking the streets to look for her. Debbie’s phone wasn’t working, so she asked her neighbour, Natasha van Niekerk-Solomons, to share a post on Facebook. Debbie then went to an Internet café – knowing nothing about computers – and was helped by someone there to put up the basic post that I then saw.

I posted on all the lost and found pages, and the community pages for neighbouring suburbs, and kept in touch with Debbie and Natasha, advising them on which vets and animal welfare organisations to contact and to preferably go and visit the organisations personally to look for Girlie. Debbie continued to walk the streets of Brooklyn and even along the beach road. I continued to post and scan posts for any dog that looked like what I imagined Girlie to look like. We still had no photograph for reference, but my mind had an emerging image based on Rocky’s photo and Natasha’s descriptions, from whenever I sent her a “maybe this one?” photo of a found dog.

Unfortunately, Debbie didn’t have access to transport and wasn’t able to get to the welfare organisations herself. Arrangements were made whereby I’d pick Debbie up one day and we’d visit all the likely organisations that Girlie may have been taken to. So, on Monday, the 3rd of February, Debbie and I went driving to the SPCA, AACL (Epping & Bellville), AWS, PDSA, and we also popped into African Tails to put Girlie on their radar. Unfortunately, Girlie was at none of these places, but we left her description and our contact details everywhere we went. We also had some posters made up that Debbie and her family attached to street poles and put up at shops in her neighbourhood.

Three weeks went by, and then, on the 24th of February, I saw a post by Kate Le on Woodstock Community that said a “sweet girl” had been picked “thin and scared”, and there was an accompanying photo of a pitifully sad-looking dog. The colouring of the dog triggered memories of the descriptions both Debbie and Natasha had shared with me: some hairs are black; some are red; some are brown; she’s all these colours but blended together. I immediately sent the photo to Debbie and Natasha. Within seconds, my phone was ringing, with Debbie and Natasha calling excitedly (and with tears!) to say, “That’s her! That’s our Girlie!” It had been nearly two months since Girlie had gone missing in Brooklyn, and she’d just been picked up in Woodstock.

I followed up with Kate Le and discovered that the dog they’d found had been picked up by the SPCA. Kate Le was so helpful and managed to get the SPCA reference number for us. I phoned the SPCA, who asked if there was any way to verify that this was Debbie’s dog; once again, not having a photo as identification was not ideal. Fortunately, Girlie had an identifying bump (hernia) on one side, and we asked the SPCA to check for this on the found dog. It took a day or two before anyone at the SPCA could approach the terrified dog enough to touch her. Once they’d confirmed that there did seem to be something on her side, Debbie and I went through to the SPCA on the 27th of February.

We didn’t want to raise our hopes all the way up in case this wasn’t Girlie, but we walked through the quarantine area and up to the kennel of this timid and scared little dog. For the SPCA staff members, she only retreated and tensed when approached. I watched as Debbie approached and knelt outside her kennel and saw the tension fall off this little dog. Her tail started to wag… just tentatively at first – “Is this really my Mom?” – and then Debbie reached through the bars.

Girlie just about leapt from her bed towards the bars and pressed her muzzle into Debbie’s hands, tail now wagging faster; she stood up on her back legs to try and get as close as she could to Debbie. There were tears! And there was no doubt that this was Debbie’s Girlie.

This precious little Girlie had travelled from Brooklyn through to Woodstock; she’d never left her home property before this and had no “street smarts”. Somehow she’d survived for two months on the streets, taking a route that had to have crossed over or under the N1 at some stage, as well as across the myriad of railway lines that leave and enter Cape Town – either directly or via Voortrekker Road – and then up through Woodstock and over its main road too.

That long walk, and being on the road for two months, did take its toll on Girlie, both emotionally and physically. She’d damaged her front right leg, and it needed to be tended to by the SPCA. It was so hard to leave Girlie at the SPCA after having been apart for nearly 60 days, but we wanted her to be pain-free before coming home for emotional healing.

During the following week, Girlie had x-rays that revealed the bones in her forearm had been fractured; a vet with osteo experience would need to check it out and probably operate on her. Once a specialist surgeon was able to examine Girlie’s x-rays, it was determined that the break had “self-splinted” and that cartilage had already formed. To reset an already healing break was not recommended, and so her leg was put in a temporary cast to support the bones as they grew together more firmly. We waited to hear this update and even visited Girlie at the SPCA on Monday, the 3rd of March, to make the waiting a bit easier for Debbie and Girlie.

And so, on Friday, the 6th of March, when I phoned for the update on Girlie’s surgery, I was happily surprised to hear that Girlie could be picked up and taken home that day. Logistically, it made sense for me to go directly to the SPCA and pick her up myself and then take her through to Debbie at her house. Girlie and I listened to the soothing voices on Cape Talk radio while driving her home; she had some padkos on the way and a little light snooze, figuring out how to rest her head on the strange bandaging.

When we arrived at Debbie’s house, Girlie’s ears and eyes became aware of familiar sounds, not the least of those being her dog buddies who clearly knew something exciting was happening and were barking a welcome from the house. Debbie hadn’t expected Girlie and me, because her phone’s battery had died, and she hadn’t seen my message.

It was a special moment to see each of them catch sight of the other and see the waiting and stress of the previous week finally drop away from both of them. Judging from how quickly she reunited with her dog friends and dashed into her house to check that the couch and bed were still where she’d left them, it was clear that this was a Girlie very happy to be back home.

We returned to the SPCA for two further weekly out-patient treatment check-ups and bandage refreshments; the last visit was squeezed in on Thursday, the 26th of March – the day before South Africa’s COVID Lockdown began. The vets decided to remove her bandaging completely, as the healing was progressing well. There was also no certainty as to whether they’d be able to see her at all, or at least regularly enough, during lockdown to check on the condition of her bandages.

Debbie has kept me updated on Girlie’s progress, reporting that she’s reclaimed Debbie’s bed as her own and stretching out to take up almost all of it. She’s also getting “good and fat”, has found her voice again, is coming out of her shell, and is enjoying hanging out with her fur-buddies, Rocky and Mischief.

Thank you to Kate Le and Bianca Cara Bernstein, who found and rescued the little terrified Girlie in Woodstock. Thank you to Amiena Davids from Obs Pets for making up clear and detailed posters. Thank you to Keagan Wolfaardt, Jody Africa and the vets at the SPCA for taking Girlie into your care and giving her the reassurance and treatment she needed. And thank you to the ongoing dedication of the on-line networkers who post and share daily and hourly to give voice to lost and found animals so as to help bring them safely back home. 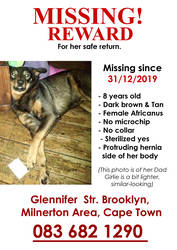 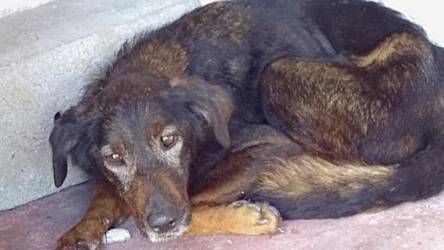 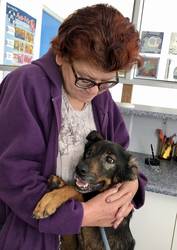 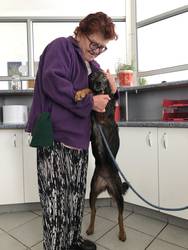 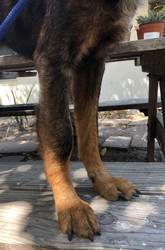 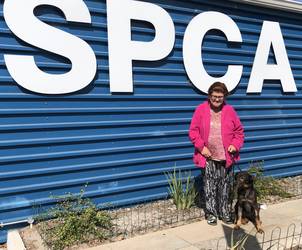 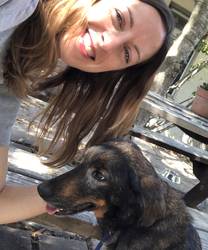 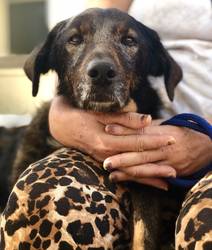 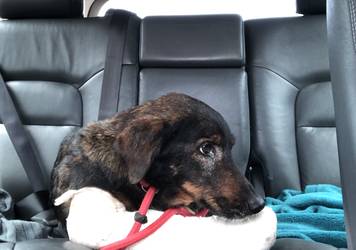 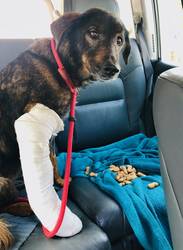 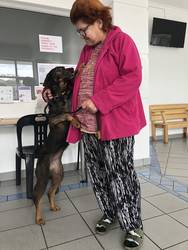 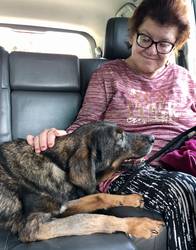 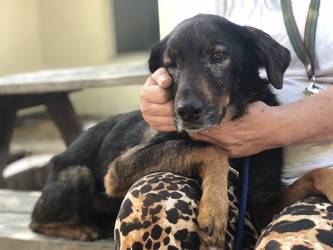 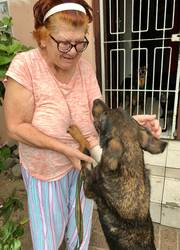 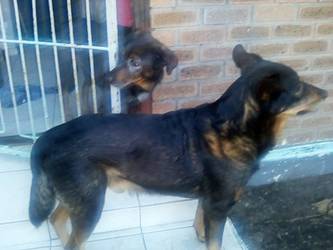 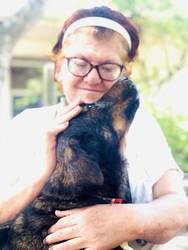