Going the extra mile for Meisie On the 10th of August, I arrived home from work to the devastating news that Meisie, our 4-year-old white-and-grey Swiss Shepherd, was gone.

As I darted to my car to search the streets, my dad arrived home and, together, we searched all over, late into the night. We spoke to everyone in the immediate area in the hope that someone had seen something that would help us find her.

Prior to this, Meisie had never gotten out and she had never roamed. Being spayed, it was highly unlikely she would just leave – and she’s a very skittish dog. We have three other dogs; Meisie adores her furbrother ZinZan, the Boerboel, whom she would never willingly leave.

That evening, we visited one of our neighbours’ houses, where the grandmother is home during the day. We were told that on returning home after collecting her granddaughter from school at around 14h30, she noticed that their gates were open and their dogs were running about. In addition, she noted that there was a van parked in front of our houses and it looked as if the people were loading something. We were devastated and utterly sick to our stomachs on learning this news.

We’d recently put up boundary walls in front of the house along with an automatic gate – which was closed when the grandmother arrived home. Immediately we were certain that Meisie had been stolen.

We couldn’t get our heads around this thought. ZinZan would never allow anyone in the yard and Meisie isn’t an aggressive dog; we just couldn’t understand why anyone would want to steal her.

At that time I’d actually closed my Facebook page but decided to reopen it to network Meisie’s disappearance. Just one day later, the news had gone viral. We received calls from all over; people who’d spotted her in traffic but who frustratingly could not stop. We printed hundreds of posters and flyers and handed them out at robots, shopping centres, veterinary practices, libraries… you name it, we did it. We took to the streets and popped them into mailboxes.

As we were attaching flyers to car windows at our local shopping centre, Sunridge Village, we came across a gentleman who said that Meisie had been sleeping in his garden for the past two nights! We were overjoyed – this eliminated the fear that she had been stolen… and she was very close to home. We immediately began searching the Baakens Valley (the area in which the gentleman lived), spending endless hours combing the area, sometimes up until 22:00.

Then, on Saturday the 13th of August, we received a call from a young lady at the lower end of the valley: she could see Meisie. We sped off. Every second was crucial. When we got there, Damian, my sister’s boyfriend, ran to her. When he spotted her, he softly called her. She gave him one look… and jumped into the river and swam across to the other side. She was simply too bewildered to recognise him. Damian jumped in after her but she was too fast. He was so brave in his attempt to catch her – it was only afterwards that he realised he’d not only torn his trousers, but dislocated his ankle too.

Hope slipped through their fingers

Losing her again was devastating; we were so close to catching her. But we were determined to find her. We spent endless days thereafter searching. Search parties were arranged; we hunted in the pouring rain, in the wind, in the cold. We left food for her where she’d been seen sleeping, but it was left untouched – she did not go back.

Willing to try absolutely anything and everything, we called on the help of pet psychics. Of the three who kindly tried to help, only one accurately described the surroundings of where Meisie had been sleeping.

For about ten days there were more no sightings of Meisie, which led us to believe that someone might have taken her in. Unfortunately, she wasn’t wearing a collar and wasn’t microchipped so, if they had, they wouldn’t have known who she was. We still struggled to believe that she would actually go to strangers, but we thought that maybe someone had managed to lure her with food. This was no longer a normal situation, so anything was possible. We approached a company that distributes flyers to different neighbourhoods and had roughly 140,000 flyers and posters printed. We also started a WhatsApp group and a reaction group where we gave regular updates and sightings.

Days passed with many phone calls. We had horrible people claiming they had Meisie, had renamed her, and that she was being used for dog fighting – unless we paid them R5,000, we would never see her again. Some people had mistaken her for a Husky, which led to a lot of confusion. None were what we’d been waiting for.

And then, after weeks of no news, we received a call from a bird watcher living on the verge of the valley; he’d spotted Meisie while watching the birds. We were cautiously optimistic and another few days passed before we could confirm that it was, in fact, our Meisie.

How Meisie was finally caught

We decided to get a trap cage. Although we left food, she didn’t enter the cage for weeks. We then set up a camera – and saw her sleeping on her blanket that we’d left for her. At least we knew she was still okay.

We were at our wits’ end. We took our two Jack Russells to walk the area, hoping that Meisie would pick up their scent, but to no avail. And then, on the 3rd of October – 54 days after she’d disappeared – the news we’d been waiting for came: the cage was closed and Meisie was inside. It was the best news ever!

For the first five minutes, Meisie didn’t recognise us at all. But then her tail started wagging… and it didn’t stop. She was starved and extremely thin and dirty from surviving on her own all that time. We rushed her to the vet where, thankfully, she was given a clean bill of health.

Once Meisie was settled in back home, with a full tummy on her soft bed, we had a little celebration with all the kind members of our group who had helped us in our quest to find Meisie.

The only explanation for her getting out of the yard was that those people were, in fact, trying to steal her as, not long after that, there was a van doing rounds in our neighbourhood stealing dogs. There was a small opening between our wall and the gate’s motor that we still had to close; we suspect that they may have lured her out through that, but, being naturally skittish, she escaped from them and sped off into the valley.

Thankfully, Meisie is back to her excellent physical condition and is close to becoming her old self. We are immensely thankful for everyone’s help and unfailing support – we are so grateful to everyone who cared as much about Meisie as we did. Thank you! 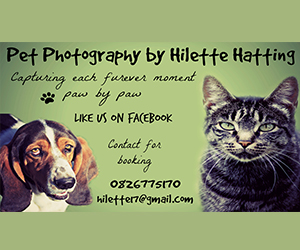