This ginger-and-white kitten, now named Katana, came to us along with three siblings. All of them had unfortunately contracted sniffles and hadn’t been treated. A rush to the vet ensued, with each of them receiving the right treatment and Katana also being seen to for his infected eye. Medication was prescribed, together with eye drops and eye ointment, three times daily. His health slowly improved, but sadly not his eye.

Once he was a bit older, and after many vet visit checkups, it was decided to remove his eye, as the infection had left his eyeball perforated. In March 2018, he underwent the operation.

This didn’t dampen his spirits. As soon as he’d recovered, we saw what a sweet and loving boy this was, and we knew that we’d need to find a loving and caring home for him. This is when Francois came to meet him – and the rest is history!

On a Sunday morning in March 2018, a colleague and new mom of a feral cat informed my partner, Francois Oberholster, that CAAA had a kitten that needed a home. The moment we saw the little fur ball, we were done for.

Not only was it a ginger cat like the beloved Strepies Francois had while still at school, but like him he’d lost his left eye. We contacted CAAA, and shortly thereafter we welcomed Katana into our home. Although we wanted him to settle in slowly, he began exploring right away. Soon Katana had the run of the house, and cuddles would be rewarded with the most peculiar, but adorable, purr.

This pirate loves to play, and entertaining him is quite easy. A crumpled piece of paper, a cork (or two on a string), chasing a piece of string, and hunting a treat up and down the living room are some of his favourite things to do.

It took him a while to accept the baby brother we adopted a month later, but watching Furdinand he saw he was capable of more. Now he’s the acrobat!

This mandarin samurai may only have one eye, but he has so much more love to give . 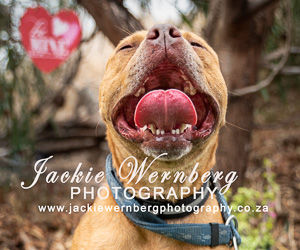