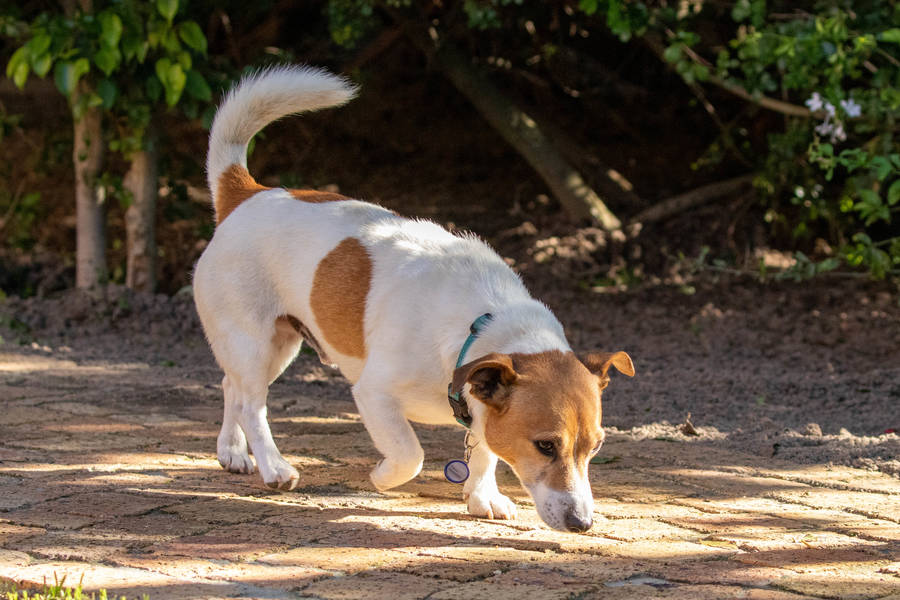 Winter in Cape Town often features some powerful and destructive thunderstorms. On the 21st of June 2019, one of these storms lashed the province and brought the perimeter wall of a house in the suburb of Milnerton crashing down. In the chaos that ensued, two little Jack Russell Terriers, Lolli and Peanut, ran off. Lolli returned soon thereafter, but it would be 22 long months before the now six-year-old Peanut would be reunited with his loving family.

After the dogs’ great escape, a huge search began, with help from Safra Levin of Rusty’s Rescues and dozens of caring neighbours and animal rescuers. Hundreds of posters were printed and handed out in hopes that someone, somewhere would’ve seen Peanut. But to no avail.

“Months turned into years with no sign of Peanut. The children still often asked about him, wondering where he was, if he’d recognise them if he came home, was he okay... How could we begin to answer these questions? Deep down I thought: ‘I don’t think our man is coming home,’ although we still hoped that he would.”

Not a prank call

On Monday the 22nd of April 2021, Andries received a phone call he never thought possible from someone on a large industrial site in Montagu Gardens, some 3km away from home. The caller started off by saying, “Listen, I’m not a prank call,” before explaining, “I think we’ve found your dog… the one that went missing two years ago. Do you want him back?”

Says Andries, “Well, of course I said ‘yes’! The caller put me back in touch with Safra Levin, with whom I’d kept in touch following her help in the initial search for Peanut. She, in turn, helped me to make contact with a real-life guardian angel – a gentleman named Stevo*. It was thanks to a poster by Safra (and the ‘doggy network’) that they’d been led to Peanut’s family – us. We immediately identified Peanut from a photo we were sent.”

“It turns out that Peanut had been living on the industrial site for some time, always carefully keeping himself well hidden, never approaching anyone. Stevo, who travels a lot for work, had been feeding him every day when he was there and leaving food for others to feed Peanut when he was away.

“Although Stevo had never managed to get close to Peanut, he and other staff members had still looked out for him, going so far as to construct a little den – with a light! – where he could safely sleep. Operational requirements had initially put a spanner in the works of their trying to find their mystery dog’s owners, but lockdown gave them that bit of extra time.”

Andries headed out to see if he could find Peanut and bring him home. After a lengthy discussion with the site’s security, he was allowed in and drove around, looking everywhere. But, just like when Peanut first went missing, there was no sign of him.

The little dog was too afraid and had gone to ground. There was no other option: he’d have to be trapped.

As it turned out, the only animal welfare which had trap cages available was the Animal Welfare Society Stellenbosch (AWSS), around 50km away. And so, first thing on Tuesday morning, Andries hit the road to fetch one. Peanut is a small dog, so a cat trap, stocked with tasty treats, was placed for him on the grounds that afternoon.

That very afternoon, Andries spotted the little white-and-brown dog on the grounds, tail down, disappearing into the bushes. Although he called him, Peanut was too shut down to recognise his voice and come to him. Nonetheless, the sighting gave him renewed hope that, soon, their furry family member would be home.

But when Wednesday dawned, it was discovered that clever Peanut had triggered the trap but managed to escape before the door could close him in.

“I was deeply disappointed,” recalls Andries, “But I wasn’t going to give up. So, back to AWSS we went to swap the small cage with a large one. On Thursday morning, I got the call we’d been waiting for: Peanut was in the trap!”

Andries took Peanut straight to the vet for a check-up and, other than being filthy dirty and infested with fleas, he was in great shape, thanks to Stevo and the others who’d kept an eye out for him.

“After his check-up, I took Peanut home, where he met his old friend Lolli and one-year-old Labrador Roxy (who’d joined our family when we felt Peanut would never return). Amazingly, they all got along beautifully straight away. Then, Peanut and I hopped into the shower to get him cleaned up as he was very dirty!

“Throughout it all, I hadn’t told the children, in case anything went wrong. I didn’t know what to expect: he could be hurt or wild, biting, etc. They had no idea that Peanut was out there, so you can imagine that, when they saw him, they were overwhelmed.

“Fourteen-year-old Gregory, who’d been Peanut’s person, was first to meet him. He couldn’t believe his eyes, and his first words were: ‘Is that Peanut? Where was he?’ We then headed off to fetch our daughter, 12-year-old Sarah, from school – with Peanut in the car. She was amazed and said exactly the same thing as her brother had! A great deal of tears were shed by all of us that day.

“Since then, it’s like he’s never been gone. The dogs all get along and I’m keeping in regular contact with his guardian angel. When I sent a video of him wagging his tail, Stevo said that he’d never once saw him wag his tail in all that time, so he must be happy now.

“Believe it or not, when this gets published, Stevo still won’t have met Peanut! He could never get close enough to touch him and had had to go away for work the Thursday morning that Peanut was caught. As soon as he’s back, we’ll definitely make sure that he gets to meet the dog that he was instrumental in saving.

“We’re all just so glad that Peanut is home, in good health, and a very happy dog.”

What matters most is that PEANUT IS HOME. He's safe and super happy to be home. We went to meet him and his family and, after we microchipped him, he was happy to stretch out and snore away on the couch.

Hugest gratitude on behalf of his family to all those involved in the search for him all those months back, and all the angels involved in his rescue, and especially the man who fed him for the 22 months he was “lost”.

Miracles do happen. Peanut’s story is definitely testimony to that. 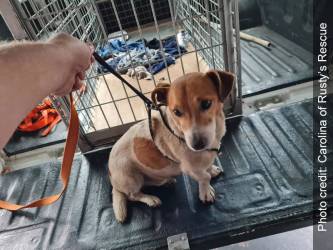 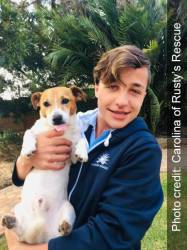 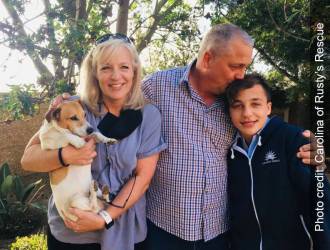 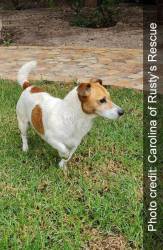 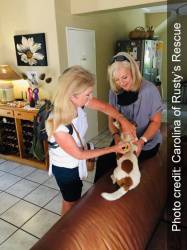 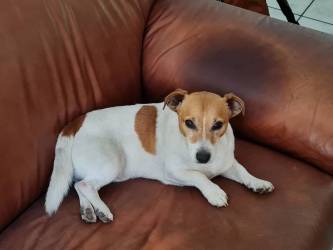 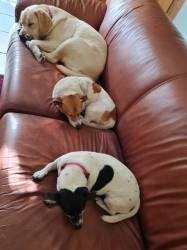 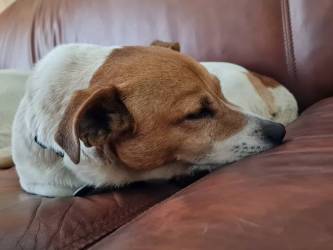 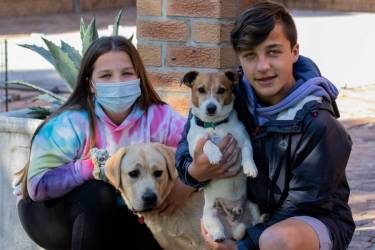 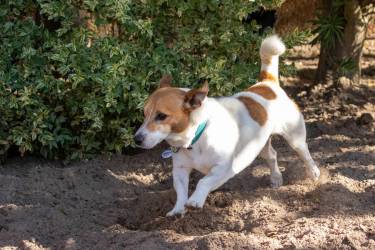 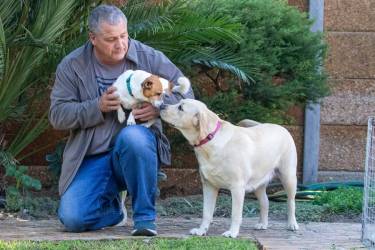 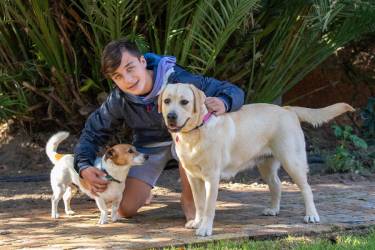 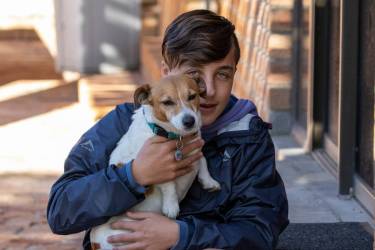 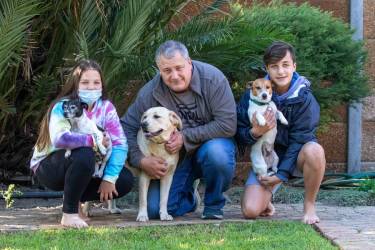