On the 2nd of October 2020, at around 13h20, my friend Tinus Gouws tagged me on a post on our community Facebook page. The post was from a nervous lady requesting help regarding a neonatal kitten crying for help behind Solarmid in Middelburg. They had to cut through a gutter to get to the baby that was using its last breath to call for help. According to the lady who requested the help, mommy cat and siblings were nowhere to be found. Maybe mommy cat had left the weakest one behind (that’s what they often do), or maybe baby was removed by humans because he was so small and cute-looking and, after an hour or two, they decided that the baby was going to be too much of a “responsibility” – not everyone can raise a neonatal kitten. Regardless, this baby needed saving.

I read through the post, noting that there wasn’t a single offer for help, and with chills running down my spine, I closed the post because, I reasoned, what was I to do? I had absolutely nothing for this tiny tot of about 190 grams. But people who know my passion for cats also know that nothing is ever too big or too small when it comes to a tiny tot in need. Within an hour, I’d put together a nappy bag that would have any first-time mommy jealous: antibiotics, Royal Canin Kitty Milk, only the best bottles, and even a miracle nipple, just in case suckling or latching became a problem.

I was already Mommy to four very spoilt and hyperactive children (yes, all my cats are my children) – one of them a jealous Maine Coon – and had originally closed the post because I just couldn’t take in anymore. But I opened Facebook again very quickly because I knew this baby had to be saved in an instant. Lucky me, I only work until 12h00 on Fridays, so I was free to spend time with my neonatal foster (at this time, my idea was to foster until baby became adoptable). Driving to fetch the baby kitten, I was anxious and had no idea of what to expect. When I reached the gate, a guy came out with a purple plastic crate full of towels, a very thin blanket and what was supposed to be a warm water bottle. Underneath all of this was the smallest, most adorable ginger kitten crying for a warm and loving touch and some of the good stuff I held in my hand – a freshly made bottle of Royal Canin Kitty Milk, nourishing goodness that I’d prepared before heading off to fetch the baby. I instantly knew that this baby was here to stay: from then on, nothing but the best was good enough for my teeny-weeny baby.

I’d already converted the spare bedroom into a sanctuary room for this little one. We also converted one of my trapping cages into a warm, comfortable and safe space as we estimated baby to be only five days old and had to prevent kitty from falling off the bed or being bothered by my other children. They were all so curious about what their Mommy was doing in a closed room hourly and then coming out smelling like a baby. Latching was a problem for the first two feedings, but luckily the miracle nipple sorted it out and baby kitty and I were more comfortable and prepared for the long journey towards health and strength. At this point, I didn’t know if it was a little blue bundle of joy or a pink bundle one.

I remember the first night: I was so anxious but managed to stay calm and pull our new baby through the night. I barely slept and popped into the room every hour to check kitty baby’s breathing and temperature and feed and clean him. I was lucky to have started this journey over a weekend, as it gave both of us the chance to adapt and accept each other and allowed me the time to nurse my baby back to good health.

I didn’t want to name baby too soon, not knowing if he’d even see the next sunrise, but he did! We named him Garfield; he really lives up to his name.

When he was rescued, Garfield had a very bad case of snuffles, eyes covered in pus and a runny nose, but Doxysyrup, Chloramax eye ointment and Rooibos tea had me covered. I soon conquered the bad snuffles, and Garfield hasn’t had even one flare-up. I give God all the thanks for saving my baby and pulling him through.

I battled for a week to get the eye infection under control. With him being a neonatal, it was even more difficult because his eyes weren’t even open yet. But one morning I walked into the room, took Garfield out of his cage, and he looked up at me with the most incredible little blue eyes. That was the best feeling ever – I couldn’t stop crying knowing that his Mommy was the first person he saw when he opened his eyes. I was so proud of what I achieved with my baby, especially as people had no hope for him. The day I collected him, I promised that I’d pull him through, even if it meant offering up much-needed sleep, because if Garfield called, I was there right away; he never had to wait for a single feeding or cry at the top of his lungs to get my attention.

He went to the office with me until he was about a month-and-a-half old, went along when I visited friends during the week, and even attended a braai with his Mommy when he was two weeks old (probably the reason my little guy loves music so much). I never left him alone for a second.

Moral of the story: A neonatal kitten is such a blessing, and if he/she turns out to be a foster failure, it’s an even bigger blessing. To all the foster mommies who bottle feed, I salute you!

My Garfield: I love you to infinity and beyond.

To all Garfield’s siblings: Thank you from the bottom of my Mommy heart for accepting and loving your baby brother. I love you all loads and loads. 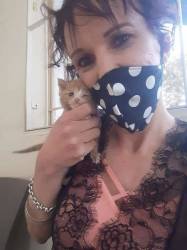 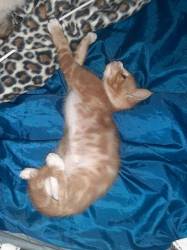 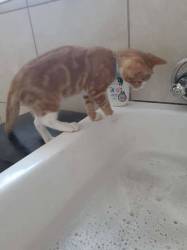 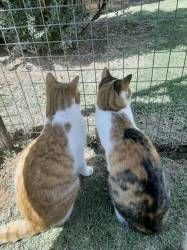 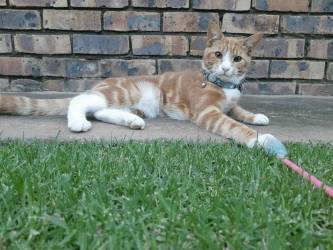 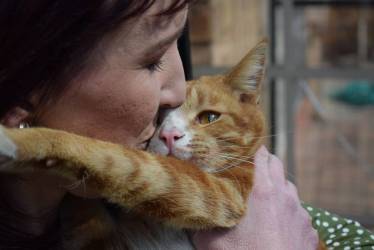 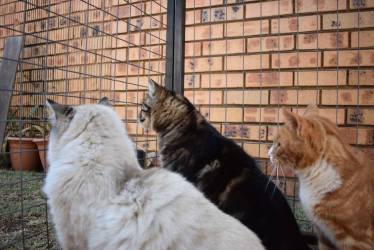 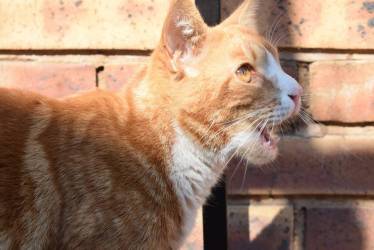 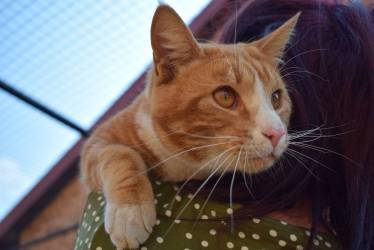 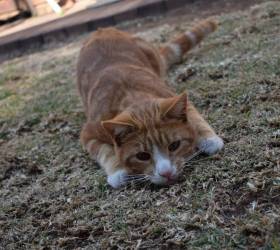 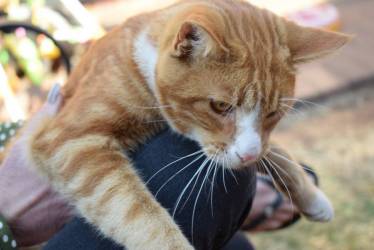 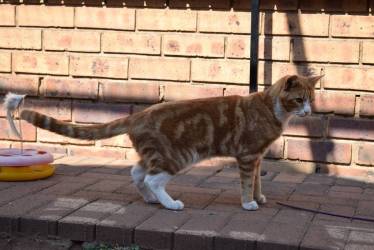 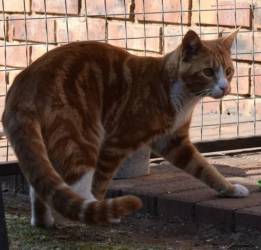 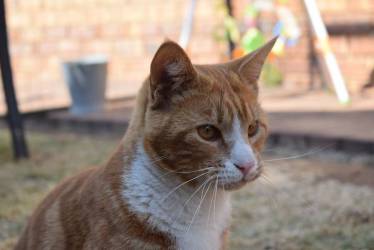 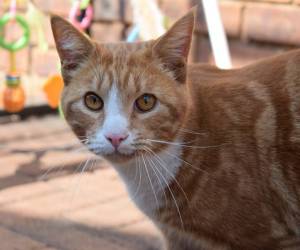 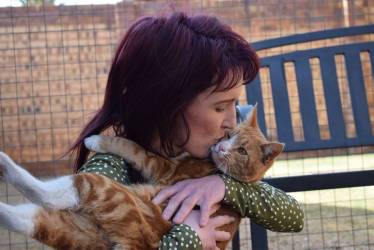 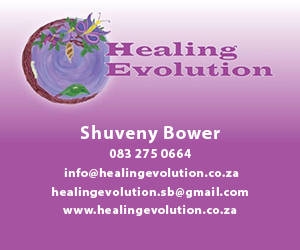 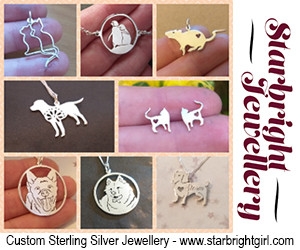 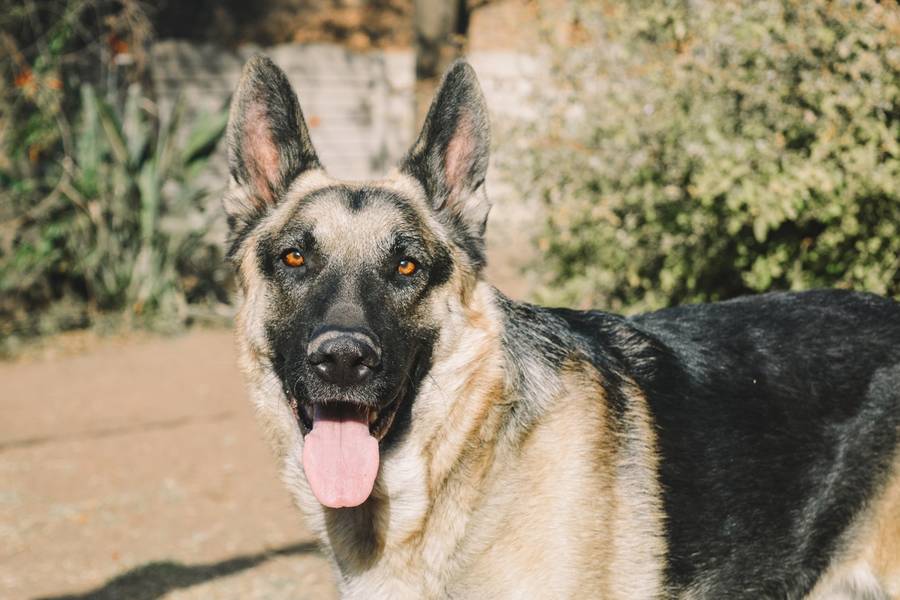